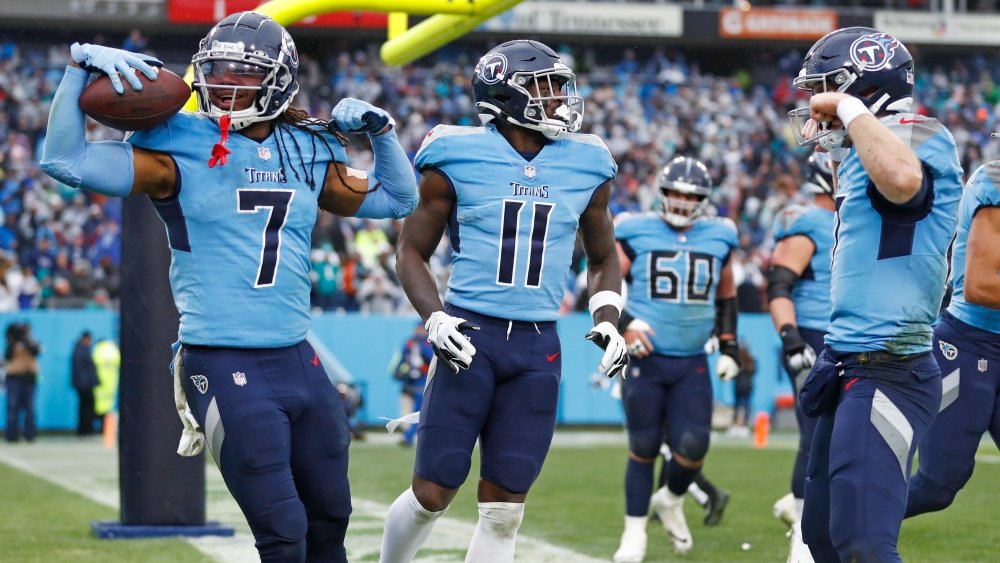 After losing their best player and then losing their way, the Tennessee Titans somehow sit poised to claim the top seed in the AFC. To do something that the franchise has not done since 2008, the Titans must win their regular season finale in Houston.

After losing three of four games, the Titans faced a potentially stressful final stretch with three games left. But with wins over the 49ers and Dolphins, combined with the Chiefs’ second-half collapse in Cincinnati last Sunday, have put Tennessee in position to clinch the #1 seed with a win over the Texans.

It hasn’t been a pretty season for the Texans under first-year coach David Culley. But they already knocked off the Titans in Nashville, and a win in their season finale would keep the AFC South champs from being able to have a valuable bye week.

With Henry Set to Return, Titans Poised for Title Run

That the Titans are in this position speaks to a number of things. First, the AFC has had tremendous parity this season, and no one has produced a dominant season.

Provided that the Steelers and Ravens don’t tie in Baltimore, ten AFC teams will finish with at least nine wins. As many as seven AFC teams could finish with double-digit wins, if the Colts are able to beat the Jaguars and there is no tie in the Chargers-Raiders game.

Second, this Titans team is resilient. Without Henry and with injury concerns with receivers A.J. Brown and Julio Jones, Ryan Tannehill and the offense imploded. But staring at a double-digit halftime deficit against the 49ers, the switch somehow flipped. They rallied to defeat San Francisco on a late field goal, then last week they ended the Dolphins’ playoff hopes with a 34-3 rout.

On Wednesday, Henry was designated to return from his foot injury, a stunning outcome after initial fears that he would miss the rest of the season.

While he won’t take the field in Houston, he will be ready to go when the Titans open the playoffs. A win over the Texans would give him another week to ready himself for a return. There may be rust, but the prospect of a fresh Derrick Henry in the postseason is frightening.

Henry is irreplaceable, but D’Onta Foreman has done an admirable job of filling in. Against the Dolphins, he ran for a season-high 132 yards and a touchdown on 26 carries. He has three 100-yard games in his last five games and 497 yards total in eight games.

Can the Texans Topple the Titans Again?

It has been an unfruitful season for the Texans, as expected. But they have arguably exceeded expectations by winning four games and not finishing at the bottom of the AFC South.

Two of their wins came against the Jacksonville Jaguars, who contrived to be an even bigger mess than the Texans were expected to be. But their other two wins are far more impressive. In Week 16, they stunned the Chargers 41-29, scoring a season-high 41 points and topping 400 yards for the first time since their season-opening win over the Jaguars.

But their best win of the season is against the Titans, a 22-13 win in Nashville in Week 11. Tennessee outgained Houston 420-190, but the Texans picked Tannehill off four times and forced five turnovers total.

Don’t count on a similar performance in this rematch. But the Texans, as bad as they are, actually have a positive turnover margin (+3) and are tied for sixth in the NFL in interceptions. As it happens, they have more games with multiple takeaways (six) than multiple giveaways (five).

Due to Tannehill’s previous performance against the Texans and his lack of quality performances without his trusty backfield mate, there is reason to worry about how the Titans will fare if they happen to fall behind.

But Tennessee would be well-served to try to do what they did last week against the Dolphins. Tannehill threw only 18 passes, and the Titans racked up 198 yards on the ground in 40 attempts.

If the Titans are able to impose their will early with Foreman and the ground game and limit what Tannehill is required to do through the air, they should win comfortably and secure a vital advantage over their fellow AFC title hopefuls with King Henry on the road to a return to his throne.