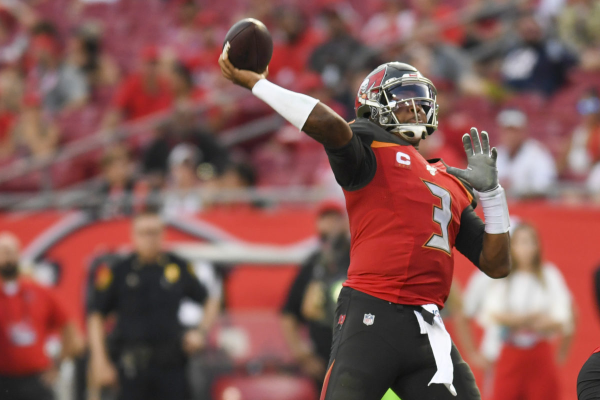 NFC South rivals will meet up on Thursday Night Football when the Tampa Bay Buccaneers visit the Carolina Panthers. These two teams have built up a nice rivalry over the last few seasons, and both teams have plenty of offensive weapons. Both the Buccaneers and Panthers suffered losses in their season openers, but each team did so in very different ways. The winner of this game could use that as momentum to have a great season while the loser will be 0-2 and will be licking its wounds.

Tampa Bay was one of the worst defensive teams in the NFL a season ago, and things didn’t change much in Week 1. The Buccaneers gave up 31 points to a young and unproven San Francisco 49ers team in suffering a 31-17 loss at home. Tampa Bay has a new head coach in Bruce Arians, but there is still plenty of work to be done. Carolina played well in its season opener, but it wasn’t enough to get a win. The Panthers suffered a 30-27 defeat at the hands of the Los Angeles Rams.

Carolina is a 6.5-point favorite over the Tampa Bay Buccaneers in this game.

McCaffrey Doing it All For Panthers

Running back Christian McCaffrey got into terrific shape this offseason, and the Carolina Panthers are going to take advantage. McCaffrey played every single offensive snap for the Panthers in Week 1 and had over 200 total yards and a pair of touchdowns. The Panthers want to get the ball in his hands as much as possible this season, but they need some other players to step up as well. Quarterback Cam Newton did throw for 239 yards in the Week 1 loss, but he wasn’t effective running the ball at all.

The Panthers could not get any pressure on Jared Goff in Week 1, totaling just one sack in that game. Carolina was able to come up with an interception in the contest, but its defense needs to be more disruptive in this one. Defensive end Gerald McCoy played in just half of the defensive snaps in the season opener, and the Panthers are looking for him to be a defensive leader. The Panthers will face another team who likes to throw the ball, and their secondary will be tested again.

Winston Needs to Improve For Bucs

The Tampa Bay Buccaneers are sticking with Jameis Winston at quarterback, but that might not last too much longer. Winston threw three interceptions and also had two fumbles in the Week 1 loss, and he put his defense in some horrible positions. Tampa Bay does have some talented options at the wide receiver position, but they weren’t allowed to get going with Winston throwing the ball to the other team. The Buccaneers need a better start from their QB in this game.

Tampa Bay gave up a ton of points a season ago, and it looks like that trend might continue this season. The Buccaneers gave up just 250 yards of total offense in Week 1, but they were not able to get crucial stops in the red zone. Tampa Bay had just one sack in the season opener, and that wasn’t against a quarterback who could not escape the pocket. The Buccaneers defense needs to do its part to help the team try to pull off the upset.

Carolina should be much improved this season, and they will be in the playoff hunt in the NFC. The Panthers nearly upset the Los Angeles Rams in Week 1, and they will be hard to beat at home in Week 2. Tampa Bay can score some points, but its defense just has too many holes. Don’t expect this game to be close, as the Panthers will run away with this game. Bet the Carolina Panthers -6.5 over the Tampa Bay Buccaneers on Thursday Night Football.