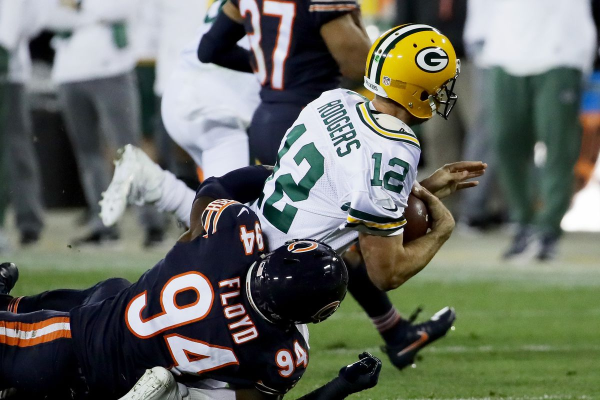 After four weeks of preseason, the games finally count, and there is no better way to start off the season than with a divisional rivalry that will feature the Chicago Bears and the Green Bay Packers. With a new coach, improved defense and new offensive weapons, the Bears are hoping to make some noise in a division that they haven’t truly competed in for years.

For the Packers, they are hoping that a healthy Aaron Rodgers is all that is needed for a return to the playoffs. Week 1 will start to give us some clarity on where these two teams stand when the Bears travel to Lambeau Field to take on the Packers Sunday night. Kickoff is scheduled for 8:20 pm ET.

The spread comes in with the Green Bay Packers as seven-point favorites in this one. The over/under on total points scored comes in at 46.5 points.

Everywhere you look, there are new faces for the Chicago Bears. First and foremost, this starts with the coach. Matt Nagy takes the reigns of the Chicago Bears in his first season as head coach. Nagy has worked for Andy Reid in the Kansas City Chiefs’ organization, most recently last year as the offensive coordinator. Seen as an offensive guru, the Bears are hoping that he can take second-year quarterback Mitchell Trubisky to the next level.

Speaking of Trubisky, he will be seeing his first full season as Bears’ starting quarterback. Last year, Trubisky threw for 2,193 yards, 7 touchdowns and 7 interceptions in only 12 games. Rushed into the starting role after Mike Glennon proved ineffective, the coaching staff last year did not fully let Trubisky loose, but with Nagy calling the plays, and added weapons around him, it will be interesting to see what he is truly capable of.

Some of those added weapons around him include wide receivers Allen Robinson II, Taylor Garbriel and Anthony Miller, along with new tight end Trey Burton. Jordan Howard and Tarik Cohen are back to man the back field for the Bears.

The biggest acquisition of the offseason for the Bears, though, might have come on the defensive side. While their defense was already good, the acquisition of 2016 Defensive Player of the Year, Khalil Mack, may make the defense great. The Bears hope that Mack’s presence can not only help with the pass rush but can also improve the play of Leonard Floyd, Eddie Goldman and others on the Bears defense.

A Healthy Rodgers Is The Packer’s Biggest Acquisition

After playing in only seven games last season, the Green Bay Packers are ecstatic to welcome back a healthy Aaron Rodgers. In those seven games, Rodgers threw for 1,675 yards, had 16 touchdowns and 6 interceptions. Green Bay truly feels that with Rodgers healthy for a full season, they are still the team to beat in the NFC North. While the Vikings and Bears will have something to say about that, it is hard to argue that he is the best quarterback in the division and when healthy, he can carry the Packers on his shoulders to competing in just about every game.

While Rodgers may be back, Jordy Nelson is not. In a somewhat surprising move, the Packers cut ties with the standout receiver. With Nelson gone, they will look to Davante Adams and Randall Cobb to pick up the load. One of the biggest acquisitions for the offense, though, might be at tight end. Rodgers will have a big target to throw to in Jimmy Graham.

While Graham has not had the All-Pro type seasons since leaving from Drew Brees and the New Orleans Saints, Rodgers will likely be able to maximize Graham’s size and agility. The Packers will rely on Jamaal Williams and Ty Montgomery in the backfield.

When you have so many new parts, it is hard to know how they will fit together once the games start to be played. With that in mind, I think the Bears have made significant progress this offseason and look like a team whose window is starting to open in the NFC North. While I don’t know if they will win the game outright, I do like their ability to keep it close, making the 7 points they are getting awfully enticing.

Given their late starts in training camp, I do expect that rookie RoquanSmith and Khalil Mack may not get the amount of snaps that they would later in the season, but I still think the Bears will be able to keep it close. Take the Bears and the 7 points in this one.

After the Novak (or Novax?) Djokovic visa saga dominated pre-tournament headlines, we can finally look forward to some on-court headlines as the Australian Open gets underway. Djokovic news has taken the focus off of the tournament, which is certainly understandable. After all, the fate of the world number one and top seed would significantly impact END_OF_DOCUMENT_TOKEN_TO_BE_REPLACED