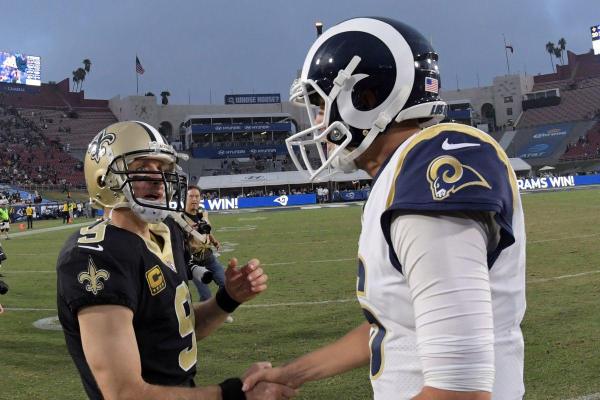 Sunday Night Football will see two NFC teams who both lead their divisions square off. The Los Angeles Rams (11-1, 1stin NFC West) will travel to Soldier Field to take on the Chicago Bears (8-4, 1stin the NFC North). For the Rams, they come into this game having won 3 games in a row, including a 30-16 win over the Detroit Lions last week. In fact, their only loss of the season was a 45-35 loss to the New Orleans Saints, another NFC division leader. For the Bears, they are coming off of a very disappointing 30-27 overtime loss to the New York Giants last week. Luckily for the Bears, division rivals Minnesota Vikings and Green Bay Packers also lost, essentially keeping their division lead at 2 games. The Rams and Bears will square off Sunday with kickoff scheduled for 8:20 pm ET.

The point spread comes in with the Los Angeles Rams being 3-point favorites despite playing on the road. The over/under on total points scored is set at 51 points.

This game is interesting as it features two teams who are dominant on opposite sides of the ball. Defensively, the Bears have been the superior team. They rank 3rd in the NFL in average yards allowed (317.9) while the Rams come in at 18th, allowing an average of 367.3 yards to opponents. In terms of points allowed per game, the Bears rank 5th (20.1 points) while the Rams rank 19th (24.8 points). That is not to say that the Rams don’t have dominant defensive players, as both Aaron Donald and Ndamukong Suh can be dominant on the defensive line.

Rams Looking To Take Down A Possible Postseason Foe

The Rams have been absolutely dominant this season, and a large reason for that is coach Sean McVay and quarterback Jared Goff. On the season, Goff has thrown for 3,754 yards, 27 touchdowns, and 7 interceptions, while being sacked 26 times. His leading receivers this season have been Robert Woods (64 catches, 971 yards, 5 touchdowns) and Brandin Cooks (63 catches, 1,026 yards, 3 touchdowns).

On the ground, the Rams have the best in the league in Todd Gurley. Gurley has rushed for 1,175 yards and 15 touchdowns this season on 233 carries. He also has 474 yards and 4 touchdowns on 46 catches.

Defensively, the team has been led by Cory Littleton (68 tackles), Aaron Donald (16.5 sacks) and John Johnson (3 interceptions). In fact, this game will feature two of the most dominant defensive forces in all of football in both Donald and the Bears’ Khalil Mack.

Bears Trying To Prove They Can Play With Big Boys

The Bears were expected to be better this season, but no one expected this good. Despite the 8-4 record and the division lead, they have still played pretty inconsistent this week, evidenced by last week’s loss to the Giants. Part of the reason, though, has been the fact that Mitchell Trubisky has been out the last couple weeks, but he is expected to play better this week. On the season, Trubisky has thrown for 2,469 yards, 20 touchdowns versus 9 interceptions and has 19 sacks. He has also added 363 yards and 3 touchdowns on 51 carries.

I have a few concerns for the Bears in this one. The first is that Mitchell Trubisky has been out for a few games. While he has been really solid for the Bears this year, I could see some rust against the Rams. With the Rams’ offense, though, Trubisky can’t afford to be rusty, even if it is for just a few series. Even more important is my concern about the Bears’ run defense. Last week, Saquon Barkley rushed for 125 yards. The week before that, the Bears allowed Detroit’s LeGarrette Blount to rush for 88 yards and 2 touchdowns. Take into account the dynamic offense of the Rams, and I think that the Bears defense, no matter how well they have played this year, will have their hands full. Take the Rams at -3.