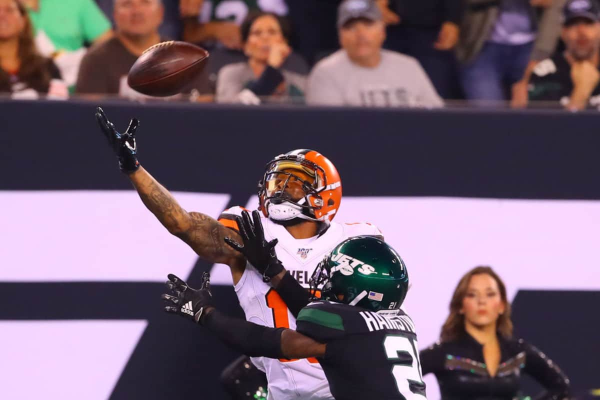 Sunday Night Football features a matchup of two teams with aspirations of having big seasons as the Los Angeles Rams (2-0) travel to First Energy Stadium to take on the Cleveland Browns (1-1).

After making it to the Super Bowl only to lose to the Patriots, the Rams are hungry for an opportunity to return to the championship. After years of dread, the Browns are trying to prove that their losing ways are behind them. Kickoff for this one is scheduled for 8:20 pm ET.

Coming into Week 3, the Los Angeles Rams sit undefeated at 2-0. In their first week, they beat the Carolina Panthers 30-27. Last week, they beat the New Orleans Saints 27-9 in a matchup that featured Drew Brees leaving the game early for the Saints. Regardless, the Rams have won their first two, but also have shown signs of weakness that need to be addressed if they want to be considered a Super Bowl contender.

Cleveland comes in 1-1 after losing its opener to the Tennessee Titans 43-13. The Browns followed that up with a 23-3 win over the New York Jets last week, although it must be noted that New York was trying to get by running out Trevor Siemian as their quarterback last week.

The point spread for this one currently sits with the Los Angeles Rams being 3.5-point favorites despite playing on the road. The over/under on total points scored is set at 47.

Only two weeks in the numbers can still be pretty skewed due to low sample size, but as of right now, the Rams are the better of the two offenses. They currently sit sixth in the NFL, averaging 28.5 points per game (30 on the road). The Browns sit 23rd overall, averaging 18 points per game (13 at home).

Rams Hope To Start Clicking On All Cylinders

Last year, the Rams were one of the breakout teams of the year, ending with a Super Bowl appearance. To repeat that success, they are looking for Jared Goff to have another strong season. To this point, though, he has gotten out of the blocks slow, having gone 42 for 67 for just 469 yards, two touchdowns and an interception through two games.

His leading receiver to this point is Cooper Kupp, who has 12 catches for 166 yards. While they may not have prolific stats to this point, also look for Robert Woods (10 catches, 103 yards) and Brandin Cooks (5 catches, 113 yards, one touchdown) to get going in the passing game sooner than later.

On the ground, Todd Gurley has started off well, albeit not dominant thus far. He has 30 rushes for 160 yards and a touchdown. Malcolm Brown comes in next on the ground with 17 carries for 90 yards and two touchdowns.

Defensively, the team is built around Aaron Donald. He has gotten off to a bit of a slow start, including having to leave last week’s game for a bit due to back issues, but seems to be good to go for this one. That could be bad news for Baker Mayfield, who was sacked three times last week. Team leaders include Cory Littleton (22 tackles), Dante Fowler and Clay Matthews (two sacks each), and Cory Littleton and John Johnson (one interception each).

Browns Out To Prove They Are For Real

While Mayfield is seen as a franchise quarterback for Cleveland, he has gotten off to a slow start this year. He has gone 44 for 73 for 610 yards, two touchdowns, four interceptions and eight sacks. Again, averaging four sacks per game could be bad when you see Donald across the line.

The leading receiver has been Odell Beckham Jr., who had a big week last week. On the season, he has 13 catches for 232 yards and a touchdown. The next highest receiver, Jarvis Landry, has just 99 yards receiving.

On the ground, it has been Nick Chubb getting the bulk of the carries. He has 35 carries for 137 yards and a touchdown. He will look to improve on the early season on Sunday.

Defensively, Myles Garrett has had quite the start to the season. He only has 10 tackles, but five of them are sacks. Leading in tackles is Joe Schobert (21), and the Browns do not have any interceptions yet.

The Los Angeles Rams certainly have not looked like the team that took the league by storm last year, but I still like their chances better than those of the Browns. Most notably, I think that Mayfield may have some concerns about his offensive line and staying upright against the Rams Sunday.

Myles Garrett is just as equally likely to wreak havoc, but I still think the Rams are more apt to put together a complete game on both sides of the ball before the Browns do. Their offense is dynamic, and their defense should improve. For my money, I am taking Los Angeles despite giving up the 3.5 points.