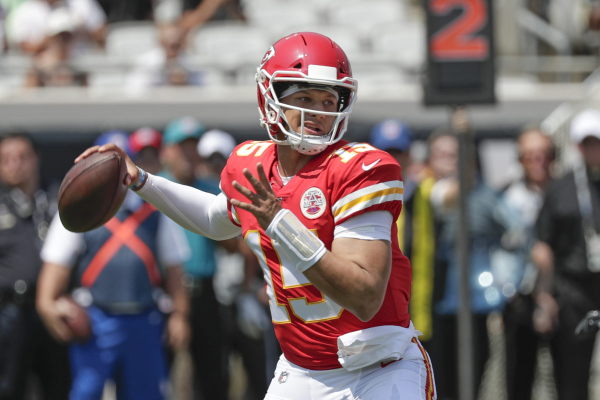 It is an AFC South versus AFC West showdown on Sunday Night Football when the Indianapolis Colts (2-2) travel to Arrowhead Stadium to take on the Kansas City Chiefs (4-0). In the AFC South, the Colts find them as one of four teams who have a 2-2 record, meaning that a win can help them gain momentum in their division.

The Chiefs already have a comfortable lead in the AFC West and will look to grow their divisional lead even more over the Chargers and Raiders on Sunday. Kickoff for this one is scheduled for 8:20 pm ET.

After beating the Titans and Falcons in consecutive weeks, the Colts had quite a letdown last week at home when they lost 31-24 to the Oakland Raiders. Their frustrations last week were in large part due to their health.

With Andrew Luck having retired, they are already turning to Jacoby Brissett at quarterback, but last week, they were also without star wide receiver T.Y. Hilton and running back Marlon Mack, as well Devin Funchess and Darius Leonard. Their health may have huge implications for Sunday night’s game as well.

The Chiefs have been rolling. They have started off the season with four wins in a row, topping the Jaguars, Raiders, Ravens and Lions. While their defense has shown some inconsistencies at times (they gave up 30 points to the Lions last week), Patrick Mahomes and company are tough to stop on the offensive side. The Chiefs will look to keep rolling in primetime on Sunday.

The Kansas City Chiefs come into this as overwhelming 11-point favorites playing at home. The over/under for points scored is set at 56.

On the offensive side, the Kansas City Chiefs are one of the best in the league. They currently sit second overall in points per game, averaging 33.8 (33 at home). The Colts currently come in 12th in the league, averaging 23.5 points (21.5 on the road).

On the defensive side, it is still Kansas City that holds the edge, but they certainly aren’t as dominant. The Chiefs come in at 18th overall in terms of opponents scoring, allowing an average of 23.5 points per game (28 at home). The Colts come in 24th in the league, allowing 25.5 points per game (23.5 on the road).

Injuries are a part of the game, but they can be especially brutal when they affect key members of your offense. One of the most notable from last week was Mack, who had to leave the game with an ankle injury. On the season, Mack has rushed 72 times for 338 yards and two touchdowns.

It wasn’t just the ground game that was affected, though, as Hilton was also out with a quad injury. Just like Mack leads the way on the ground, Hilton leads the way through the air as he has 20 catches for 195 yards and four touchdowns.

Both of these two are questionable for Sunday night’s game, and that could have huge implications for Brissett. Speaking of Brissett, he is currently 90 for 138 for 911 yards, 10 touchdowns and two interceptions through four games. He has also been sacked six times.

Kansas City’s offense has been rolling, and Mahomes continues to look like the steal of his draft class. On the season, he is 106 for 156 for 1,510 yards and 10 touchdowns and has yet to throw an interception. In four games, he has also been sacked just three times, a testament to the offensive line for Kansas City. Mahomes has also rushed 12 times for 64 yards.

The leading rusher for Kansas City has been LeSean McCoy. On the season, McCoy has rushed 40 times for 214 yards and two touchdowns. McCoy also has nine catches for 71 yards and an additional touchdown.

The leaders in the passing game, though, are Travis Kelce and Sammy Watkins. On the season, Kelce has caught 24 passes for 369 yards and a touchdown. Watkins currently sits at 23 catches for 365 yards and three touchdowns.

Defensively, the Chiefs have struggled, having given up over 25 points in three of their four games. Still, the stat leaders are Kendall Fuller (29 tackles), Emmanuel Ogbah (2.5 sacks) and a trio of players with one interception apiece.

Health Will Determine Who To Bet On

Eleven points is a lot for one team to spot another in the NFL. Still, if the Colts have to play shorthanded again, that is exactly what I would do. For the bet on this one, I think it is best to wait closer to game time to see what the status of Mack and Hilton is. If they are playing, I think I take the gamble that the Colts can hang within 11 points of the Chiefs despite playing on the road. If they are out, though, I think it is a no-doubter that I am going with Kansas City to run away with this one.