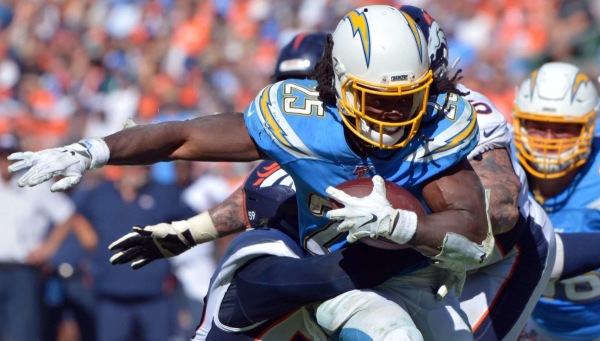 Sunday Night Football features a matchup of the AFC North versus the AFC West when the Pittsburgh Steelers (1-4) travel to Dignity Health Sports Park to take on the Los Angeles Chargers (2-3). Both of these teams have gotten off to disappointing starts as they both had playoff aspirations this offseason.

The Steelers have been grounded by the fact that their star quarterback, Ben Roethlisberger, is sidelined for the rest of the season. The Chargers found themselves without star running back Melvin Gordon early in the season, although he is now back in the mix alongside Austin Ekeler.

Still, both teams hope to make a run at the playoffs, and Sunday night will be a good opportunity for that to get started. Kickoff for this one is scheduled for 8:20 pm ET.

For the Steelers, it has been quite a frustrating start to the season. This is not the Pittsburgh Steelers of old, though. There is no Antonio Brown, no Le’Veon Bell, and now, no Roethlisberger. After Roethlisberger suffered a season-ending injury, the team moved onto Mason Rudolph; however, after Rudolph suffered a concussion last week, the Steelers now move onto undrafted rookie quarterback Devlin Hodges.

The Chargers have had quite an inconsistent start to the season thus far. They have been in most every game they have played in (including a 27-20 loss to the Texans, a 13-10 loss to the Lions and a 20-13 loss to the Broncos), but their inability to overcome has put them into a bit of a hole. After getting torched by the Broncos’ run game last week, they will really need to focus on slowing down a Steelers’ rushing attack led by James Conner.

The Los Angeles Chargers come into this as six-point favorites playing at home. The over/under for points scored is set at 42.

On the offensive side, neither of these two teams have been especially dominant. The Chargers rank 19th in the league, averaging 20.6 points per game (21 at home). The Steelers come into this one averaging 19.8 points per game (11.5 on the road), good for 22nd overall.

It is never an easy task for a backup quarterback to step in and carry an offense. It is even tougher when you are a third-string quarterback and were undrafted coming out of college. That is exactly what the Steelers are asking of Hodges, though. Hodges, the all-time leading passer in FCS out of Samford, started the season on the practice squad. Now he will be trying to lead the Steelers to just their second win.

Hodges does have some support around him. Through the air, he will have leading receiver JuJu Smith-Schuster at his disposal. On the season, Smith-Schuster has 24 receptions for 333 yards and two touchdowns.

The second-leading receiver is Conner, who has 19 receptions for 153 yards and a touchdown. Speaking of Conner, he also leads the way on the ground with 58 rushes for 194 yards and a pair of rushing touchdowns.

On the defensive side, the leaders for the Steelers are Devin Bush (45 tackles), Stephon Tuitt, T.J. Watt and Cameron Heyward with 3.5 sacks each, and six players with an interception apiece.

Chargers Looking To Move Back To .500

A frustrating start to the season can still find the Chargers at .500 if they can win Sunday night. Leading them, as always, will be quarterback Philip Rivers. On the season, Rivers is 133 for 194 for 1,465 yards, seven touchdowns and four interceptions. In five games, the veteran quarterback has been sacked 11 times.

Rivers’ leading receivers to this point have been Keenan Allen and Austin Ekeler. Allen has 38 receptions for 470 yards and three touchdowns, while Ekeler has caught 39 passes out of the backfield for 356 yards and three scores.

Speaking of Ekeler, he has led the rushers with 227 yards on 59 carries and three touchdowns. Despite that, expect Gordon to start cutting into his rushing production.

On the defensive side, the Chargers are led by Thomas Davis (41 tackles), Joey Bosa (three sacks), and four players with an interception apiece.

Despite how inconsistently the Chargers have played, I still like Rivers and Los Angeles in this one. It all comes down to an undrafted rookie, who started on the practice squad, getting his first NFL start ever. Even with a reliance on the run game, I still don’t think the Steelers will be able to get it done, especially on the road. Certainly, this could be a Cinderella-type story for Hodges, but my money is that the Chargers not only win, but they cover the six-point spread as well.