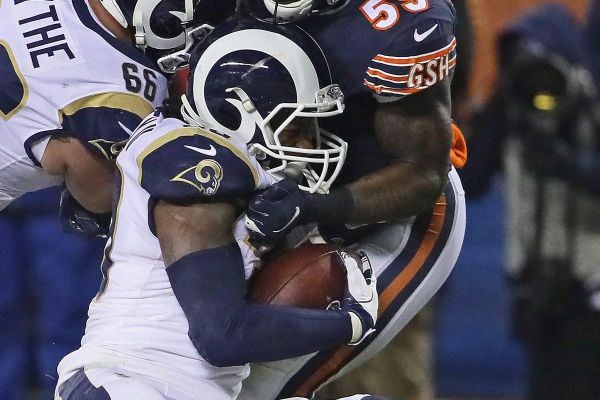 The Philadelphia Eagles head to Los Angeles to take on the Rams on Sunday Night Football. Both teams are coming off of disappointing losses to varying degrees. The Cowboys beat the Eagles to basically end their season last week. Now, they take on Jared Goff and the Rams without Carson Wentz and without a lot of motivation. The Eagles COULD sneak into the playoffs, but they would need a lot of things to happen, like the Vikings and Seahawks losing to teams like the Bucs, Dolphins, and 49ers. They won’t give up, but their chance to be right there slipped through their fingers last week.

The Rams are also coming off what I would call a demoralizing loss. The Bears really shut them down last week on the road in the cold. This could be a hit to their confidence in their offense that they probably believed was somewhat unstoppable. It also likely motivates them to get home-field advantage in the playoffs over teams like the Bears and Cowboys, who have shown the defensive prowess to stop elite offenses.

The Eagles come into this game with Nick Foles running the offense. Maybe this is the spark this offense needs, but that is probably optimistic thinking. The Rams’ defense is getting healthier with the addition of elite cornerback Aqib Talib. The Rams want to run a lot of man coverage, so the addition of an elite corner really allow that scheme to be much more productive.

Last week, we saw the Rams play better defense than we had most of the year while Talib was out. The Eagles offense just isn’t creative at all, and it really shows when you look at who they are getting the ball to. They traded for Golden Tate at the trade deadline, but he is barely touching the ball. A good coach will find a way 4 weeks into getting a really good football player the ball enough so he can make an impact. Maybe Tate doesn’t know the playbook enough, but you can use him as the first read on 6 or 7 scripted plays or even get him the ball in the running game or the screen game. Some have made the argument that the chemistry isn’t there, but that isn’t an excuse to never get him the ball in simple ways.

Last week, the Eagles ran the ball 14 times, and 4 of them were by Wentz for -3 yards. Now, they ran much fewer plays in that game than they should in this one, but that is still a concern when it comes to being predictable. Wade Phillips, the Rams’ defensive coordinator, wants teams to run on him. If the Eagles try to force this pass-heavy idea with Nick Foles and company, it may be a long night.

I expect the Rams’ offense to come into this game hungry to show that they are still an elite offense. For a team that prides themselves on being efficient, smart, and dominant on the offensive end, last week was an embarrassment. That leads me to believe we see a motivated team and a motivated game plan.

To compound this, the Eagles have a very exploitable defense if you know how to attack it. The secondary is horrible. Focus on protection, keep the QB upright, and one of your WRs will be open downfield eventually. I fully expect the Rams to do this in this game. Todd Gurley could get involved in that as well, but this lines up like a much better spot for the Rams receivers.

At the beginning of the year, Gurley had some crazy touchdown variance. The Rams simply got to the 5 yard line or closer a lot. They would have a 36-yard completion to the 2 and Gurley would smash in yet another touchdown. That can easily happen this week, but expecting 2 TDs out of Gurley every week was just unsustainable, especially with his general lack of really explosive and long runs.

13 is a really big number to be laying against the reigning Super Bowl champions, but I can’t go the other way. I think the Rams will move the ball efficiently on this defense and eventually force a turnover in the secondary to shift the game significantly in their favor. I’ll take the Rams (-13) in a pretty high-scoring affair.

After the Novak (or Novax?) Djokovic visa saga dominated pre-tournament headlines, we can finally look forward to some on-court headlines as the Australian Open gets underway. Djokovic news has taken the focus off of the tournament, which is certainly understandable. After all, the fate of the world number one and top seed would significantly impact END_OF_DOCUMENT_TOKEN_TO_BE_REPLACED