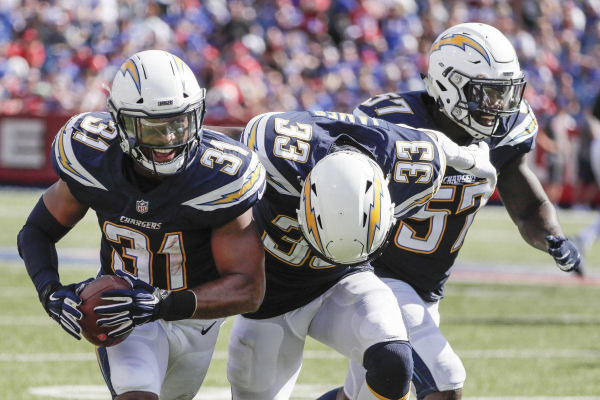 The Sunday night game consists two postseason contenders from the AFC when the Los Angeles Chargers travel to take on the Steelers in Heinz Field. In the last 2 weeks, the Broncos have beaten both of these teams but besides that mutual slip-up, these teams have been great recently. The Chargers are getting healthier on the defensive end with Joey Bosa coming in but they also lost Melvin Gordon last week for a few weeks. The Steelers have been really healthy all year and that should continue to help them down the stretch.

Big Ben Needs to Stay in the Pocket

The Chargers defense vs. the Steelers offense is the key matchup for me in this game. The Chargers run a lot of man concepts on defense, probably more than anyone else in the league. This will create different opportunities and challenges for the Steelers. Without Joey Bosa, this team has struggled a lot more than expected in defending the passing game. Bosa is an elite edge rusher and without his presence on the line, Melvin Ingram gets more attention pushed towards him and the Chargers struggle to get to the QB quick enough to make the man coverage work. The longer Big Ben has in the pocket, the more likely the Steelers win this game. Ben has made a lot of mistakes recently and I think that this increased pressure can really force him to make some bad throws.

The Chiefs have had the Chargers number for years now. Why? They have the speed to beat man coverage before the pressure gets there. I think the Steelers can attempt to duplicate this strategy to a slightly lesser effect than the Chiefs are able to. When it comes to burning a defender, Tyreek Hill and Travis Kelce are better than Antonio Brown, Juju, and Vance McDonald, but its one of the most talented receiver groups in the league. If they can burn the defenders off of the line, we could see the Steelers make a lot of plays on offense.

The Chargers offense has been really solid this year with Rivers at the helm. Having one of the best seasons of his career, Rivers has just been able to pick apart defenses and drive down the field enough to win ball games consistently. The receiver group does not get a ton of credit for this team due to the lack of gaudy statistics. Mike Williams has started to live up to his top-10 pick potential in year 2, Keenan Allen has been the same guy for the last 5 seasons, and Tyrell Wiliams is a solid deep threat. This team has a prototypical receiver group with the possession receiver, deep threat, and red zone threat. Austin Ekeler should be able to take over for a lot of Melvin Gordon’s touches in this game. Ekeler has been a major surprise in his second season showing that he needs to be getting more touches anyways. Last week, Ekeler caught 10 passes for 68 yards and has proven all year that he is a major threat when he is on the field.