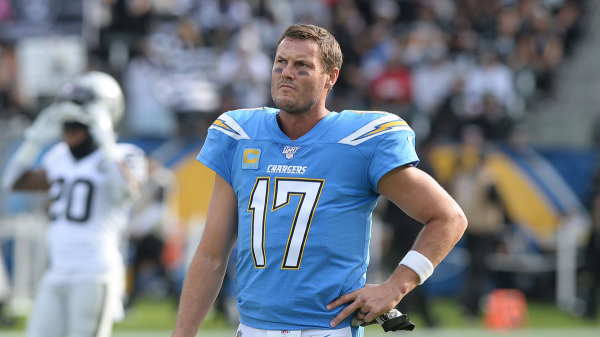 After 16 seasons with the Chargers, Philip Rivers and the team have agreed to part ways as the veteran quarterback enters free agency.

The joint announcement by Rivers and the organization comes a month after the 38-year-old moved his family from California to Florida, hinting at his split from the team. According to Chargers general manager Tom Telesco, making the decision now will “allow everyone to put themselves in the best position for success in 2020.”

Last season, the Chargers entered the year with Super Bowl aspirations but finished 5-11 and last in the AFC West. Rivers threw for 4,615 yards with 23 touchdowns (his lowest total since 2007) and 20 interceptions.

However, the eight-time Pro Bowler will take with him a large amount of experience and success, including his ranking of sixth in NFL history in the categories of both touchdown passes (397) and passing yards (59,271).

Yes, Rivers is rapidly approaching 40 years of age. And yes, Rivers’ best football is likely behind him. Yet the long-time Charger has proven he’s a quarterback capable of leading a team.

So, where would Rivers be a perfect fit, and who is most likely to land the veteran quarterback?

Miami To Use Rivers As Bridge Quarterback?

If the Dolphins view Rivers as a significant upgrade over Ryan Fitzpatrick, they could make a move for the former Charger as they look for a bridge quarterback while getting their future first-round draft pick up to speed.

Many expect Miami to take Alabama QB Tua Tagovailoa in the draft, which means they’ll need a veteran to lead the team in 2020. Tagovailoa could certainly learn plenty from a man who’s played 16 seasons in the NFL, some of them at a very high level.

The Dolphins are currently the fifth favorite with odds of +900 to have Rivers on the Week 1 roster.

Raiders Could Bring In Rivers

It appears that Jon Gruden’s Raiders are all in on Tom Brady. But if Brady decides to stay in New England or go somewhere other than Vegas, the Raiders could opt for Rivers over Derek Carr.

After going 7-9 in 2019, the Raiders feel they’re close enough to becoming a playoff team that a proven veteran could get them over the hump.

At +700, the Raiders currently sit fourth in the Rivers sweepstakes.

Carolina suffered through a tough season in which it went 5-11 and played mostly without Cam Newtown, who dealt with injuries throughout the year.

If new head coach Matt Rhule wants to have a strong backup plan for Newton, Rivers would be a perfect fit for the Panthers. It’s also unclear whether or not Rhule would like to move on from Newton altogether, so Rivers could slot in as the starter right away as he looks for a long-term solution.

One of the more interesting potential landing spots for Rivers is Indianapolis, which went 7-9 with Jacoby Brissett under center in 2019.

The Colts were in playoff contention for the vast majority of the season but didn’t have enough firepower to claim a Wild Card spot. If Indianapolis thinks Rivers could be an upgrade over Brissett, it would be smart to add the former Charger to a roster that’s ready to win right now.

The Colts are the second favorite to land Rivers with odds of +200.

Bucs In Pole Position To Lure Rivers In

It would surprise nobody to see Arians kick Winston out of the building and bring in Rivers to lead a Tampa Bay roster with a fair amount of talent.

Partly due to the fact that Rivers already moved his family to Florida, the Buccaneers are the favorites to sign Rivers and have him on the Week 1 roster with odds of +150.