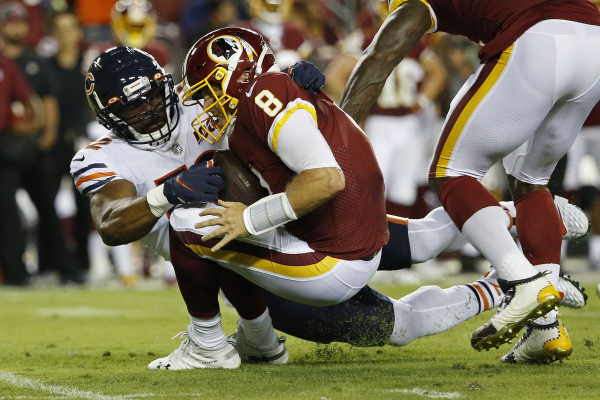 Jay Gruden on the hot seat — What’s next?

Jay Gruden, the slightly less remarkable brother of Jon Gruden, is the head coach of the Washington Redskins, this we know. But there’s something else we also know: He’s probably going to get fired if this mediocrity continues.

The Redskins have been an absolute dumpster fire since the RG3 era, which was the last time the team had actually made the playoffs before an untimely knee ligament injury forever changed the trajectory of the team, as well as Robert Griffin III’s career.

Since then, Washington has essentially been one of the league’s most endlessly terrible franchises, year in and year out, as mediocre quarterbacks have been at the helm. Head coaches, too. From the likes of Kirk Cousins to now Case Keenum, the supposed quarterback guru that is Jay Gruden has only seemed to be a guru for coaching really underwhelming football teams.

So yeah, shocker, he’s on the hot seat. But what else does this team actually have to look forward to?

Case Keenum. The name alone conjures images of ducks struggling to stay aflight and lots of empty spaces in the win column. The fact of the matter is, the guy is a career backup that overachieved here and there, and voila, he’s magically ascended to starting quarterback status. But here’s the problem: the guy is not a starting quarterback.

The fact he even has a job in the NFL as a starter is a miracle, but if the Redskins are to do anything in this league, and anytime soon, Gruden needs to bench Keenum.

Despite the fact the Redskins look like the same mediocre football product that’s put on the field year in and year out, it’s done little to motivate Gruden to even consider putting in Dwayne Haskins, the highly-touted Ohio State product that most people have very high hopes for.

So why wouldn’t Gruden start Haskins? Simple: the message it communicates. To everyone, starting Haskins would signal that the Redskins have essentially given up on the season. Rather than staying committed to your preseason starter, who’s a veteran quarterback, you start an untested rookie, essentially letting him fail on the job so he can get better.

In other words: same old, same old. Before his seat gets scalding hot, Gruden will probably wise up and let Haskins play.

Haskins has the potential to be a great quarterback, but until he gets a chance to win and lose as a starter in the league, he’s never going to get the reps he really needs to improve. In the NFL, you either have it, or you don’t.

There are only so many Nick Foles; there are plenty more Brock Osweilers and Case Keenums, and forgive me, that was really an insult to Foles.

Gruden should let the rookie play instead of continuing to bang his head into the wall. Sit Keenum down and let a potential star player put some work in before it starts.

To be fair to the Redskins, their schedule has been pretty rough. They’ve played the Eagles on the road, a very good Dallas Cowboys team, and a pretty good Chicago Bears squad. That’s a tough three-game stretch, and if we’re being generous, not very fair to them.

Going up against the slightly-less-pathetic New York Giants, who are coming off an inspiring comeback victory in rookie QB Daniel Jones’ first game, we may very well see the Redskins finally notch a win, and for Gruden’s sake, a little bit of a cold draft to wash over that hot chair he’s presently sitting on.