Jones Time! Does Daniel Jones Make The Giants Legit Contenders In The NFC? 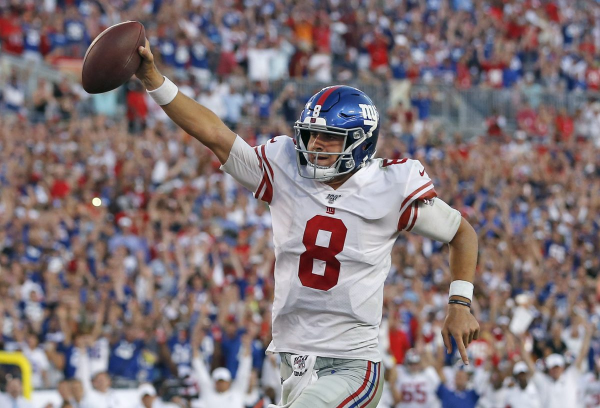 When the Tampa Bay Buccaneers jumped out to an 18-point lead over the New York Giants on Sunday afternoon, it felt like quarterback Daniel Jones’ first NFL start was nothing more than a typical rookie performance.

Instead, it turned out to be something special.

With just 1:16 left to play, Jones took a fourth-down snap and ran seven yards for the go-ahead score. After a missed field goal for Tampa Bay, Jones’ rush ended up as the game-winner.

Yet it wasn’t a single, game-winning play that defined Jones’ first start in place of long-time franchise quarterback Eli Manning. Jones looked like a tenured veteran as he put his team on his back and won an NFL game any way he could.

On top of two rushing touchdowns, Jones went 23 of 36 for 336 yards and two touchdowns through the air. For the record, Jones’ 336 yards topped the 250- and 306-yard marks put up by Manning in the first two weeks of the season.

Sure, the Giants needed a missed 34-yard field goal to get the win as time expired. However, New York fans won’t care how the wins come if Jones turns out to be the real deal.

So, while fans and experts alike were quick to criticize the drafting of Jones at the No. 6 overall spot this year, Jones has kicked off his 2019 campaign looking like a top-10 draft pick. Will it be enough to turn the Giants into contenders?

Stats Holding the Giants Back

The New York Football Giants can feel great after a come-from-behind win led by their rookie QB. However, even if the former Duke man is a true NFL quarterback, the Giants have a lot to overcome if they’ll make any noise in the NFC.

First of all, Jones has shown a personal flaw. Although he completed 85 percent of his passes in the preseason and scored four total touchdowns in his first NFL start, Jones has trouble hanging on to the football.

After fumbling three times in the preseason, Jones fumbled on one of his four late-game snaps in the Giants’ season-opening loss to the Dallas Cowboys. In Sunday’s win, Jones lost two second-half fumbles when he was sacked.

Clearly, the positives outweigh the negatives for Jones in limited action, but ball security is a bad issue for quarterbacks to have.
The more pressing issues for the Giants aren’t Jones-related. First of all, New York has allowed at least 28 points in each of its first three games. By giving up 460 yards per game thus far, New York ranks 31st in the NFL. Only the Dolphins are worse.

When it comes to scoring defense, the Giants rank 30th with an average of 31.3 points allowed.

Offensively, the Giants struggled to protect Jones. Against the Bucs, New York allowed five sacks. If that problem persists, the Giants will have difficulty keeping up with the better offenses in the NFL.

However, great quarterback play can cover up a ton of mistakes for any NFL team. So, is playoff football on the horizon for New York?

What the Odds Say About the Giants

A victory over the Buccaneers in Week 3 feels good, but there’s a lot of winning to do if New York is going to get itself in the race for the playoffs after dropping the first two games of the season.

There’s more bad news for New York when looking at odds within the NFC East, which appears to have two solid teams. Although Philly lost to Detroit Sunday, the Eagles are still sitting at +160 odds to win the division. The 3-0 Cowboys have the best odds in the NFC East at -180, and the Giants are all the way back at +2100.

So, are the Giants contenders with Jones at quarterback? Not yet.