Rams vs. Seahawks Preview: Will the Seahawks Clinch Another NFC West Title? 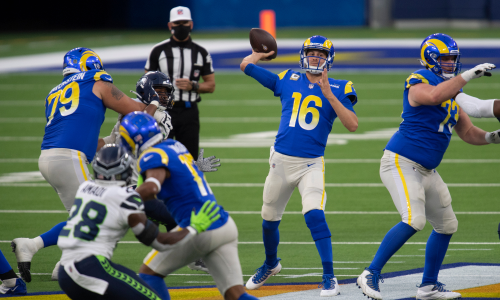 The NFC West stands to be decided Sunday afternoon in Seattle, as the Seattle Seahawks (10-4) and Los Angeles Rams (9-5) duke it out. The two teams separated themselves from the pack in the NFC West weeks ago and have flip-flopped the favorite role, but coming into Week 16, it is the Seahawks who sit in the driver’s seat. Sunday’s showdown kicks off at 4:25 pm ET/1:25 pm local time and will be televised on FOX. The Seahawks are favored by 1.5 points at Fanduel, while the total for the game sits at 47.5.

The two teams went into Week 15 tied atop the standings, but while the Seahawks edged out NFC East leader Washington 20-15 on the road to hit the 10-win mark, the Rams somehow allowed the previously-winless New York Jets to leave Los Angeles with a 23-20 win. As a result, Seattle will win the division if they can take the victory in this matchup. However, if the Rams win, it will give them two wins over the Seahawks this season and a tiebreaker advantage heading into the final week of the regular season.

Who will come out on top in one of the biggest games on the Week 16 schedule?

Most would have expected the Rams to steamroll the Jets last week, but that turned out to never be a possibility. The Jets led 13-3 at halftime and 20-3 in the second half before the Rams woke up and made a game out of it. They trimmed the deficit to 23-20 in the fourth quarter and had the ball in Jets territory in the final minutes, but a drive stalled at the 37 and the Jets held the ball for the final four minutes to close out the win.

The Rams are ranked 8th in the league in yards per game, averaging 383.2 yards per game, but they were able to generate only 303 yards against a Jets defense that had been one of the league’s most porous defenses all season long. Jared Goff has had a nice rebound after 2019 that was not his best, but he was only 22 of 34 for 209 yards against the Jets and threw an interception that led to a Jets field goal in the first half. Beyond that, the Rams had a punt blocked that led to another field goal, and on their final drive, started at the Jets 43 after a punt return but committed a costly penalty that wiped out a run that would have put them in the red zone.

Those kinds of issues cannot be repeated against a Seahawks team that is far, far better than the Jets will be anytime soon.

The Seahawks have been far from flawless since starting the season 5-0, but they have won two in a row since a terrible home loss to the New York Giants in Week 13 to put themselves in position to clinch the division on Sunday. Last time out against Washington, the Seahawks rolled out to a 20-3 lead after three quarters but had to hold on for a 20-15 win, as Washington scored two touchdowns in the fourth quarter then drove inside the Seattle 25 in the final two minutes.

Russell Wilson has had one of his best seasons and would be in the hunt for the MVP were it not for Patrick Mahomes being Patrick Mahomes. Wilson is completing a career-high 70.2% of his passes and has already reached a career-high with 37 touchdown passes, and with 3,806 passing yards going into the final two games, is on track to surpass his previous high of 4,219 yards, which he set in 2016. Wilson has also been a big threat with his legs, rushing for 475 yards and averaging 6.3 yards per rush. That said, he has thrown a career-high 13 interceptions this season, and against Washington, he was only 18 of 27 for 121 yards, with one touchdown and one interception.

Defensively, Seattle had some serious issues early in the season. But since losing 44-34 to the Bills in Week 9, the Seahawks have not given up more than 23 points in a game. That came in Week 10 against the Rams, in a 23-16 loss in Los Angeles. If the Seahawks can avenge that defeat, the division will be theirs.

Los Angeles Rams team total under 23.5 points (-106): Seattle has been a much better team defensively over the last several weeks, and that will continue in this game. This is a solid bet at some nice odds.

The Rams will no doubt be hungry to make up for their poor performance last week against the Jets. Perhaps they were caught looking ahead to this game, but whatever the case, they need to win in Seattle to keep from having to see the Seahawks celebrate a division title. Unfortunately for them, that is exactly what will happen. The Seahawks’ home loss to the Giants a few weeks ago was an aberration. They are excellent at home and will produce again to secure another NFC West title.

After extending their hot and San Diego’s cold streak, the Seattle Mariners will be looking to leave Petco Park with a two-game sweep as they take on the Padres this afternoon. Yesterday, the Mariners pounded out a dozen hits and plated eight runs, and Chris Flexen pitched 6.2 shutout innings to collect his third straight END_OF_DOCUMENT_TOKEN_TO_BE_REPLACED