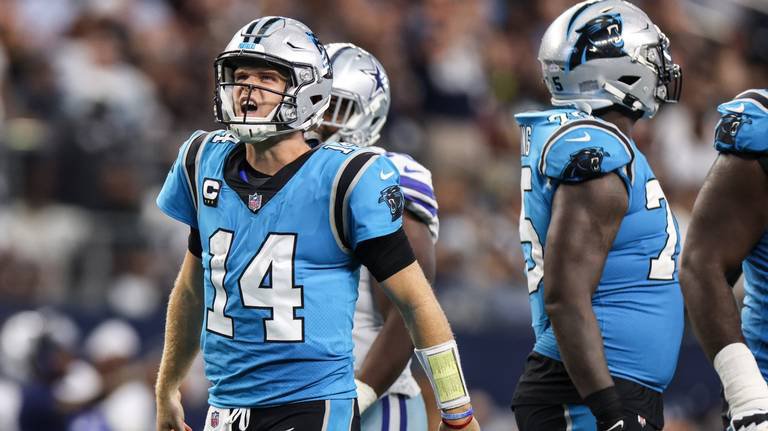 The Eagles won their first game of the season, but things have not gone well since. Little was expected for the rebuilding Eagles if you go by preseason NFL betting odds, but there are few silver linings to be found when you give up 83 points in two weeks.

One of those games was against the Dallas Cowboys, who put up 36 points to hand the Panthers their first loss last week after scoring 41 against the Eagles. It was a tough afternoon in Dallas for Carolina, but the Eagles should not cause them similar stress.

This is a great spot for the Panthers to bounce back at home, where they are 2-0 on the season.

Philadelphia Eagles vs Carolina Panthers odds are via FanDuel Sportsbook as of Sunday, October 10, 2021 at 12:40 p.m. ET. Want to see NFL betting odds from several top online sportsbooks for every NFL matchup each week? Check out our NFL odds.

The offensive numbers look pretty good on the surface for Philadelphia. They are ninth in passing and tenth in rushing, but that has added up to just 18th in points. Quarterback Jalen Hurts is doing a good job making plays with his legs and not turning the ball over, but when they really need a play he has struggled. Rookie receiver Devonta Smith has looked good most of the time and is leading the team in receiving. But he looks really small out there, and unlike at Alabama he has not been able to do so much after the catch. Receiver Greg Ward has two catches on the season and both were for TDs. Maybe they should throw it to him more. He was their leading receiver a couple of years ago.

Similar to the offense, the Eagles’ defensive numbers can be a little deceiving. There is no deception to being the worst team in the league against the run, but they are seventh against the pass. They are 14th in yards allowed but 24th in points. It seems like they are either getting three and outs or giving up touchdowns with not much in between, and they are not getting enough of the former. They have to tighten things up.

Carolina in Perfect Spot to Get Strong Start Back on Track

I think it is fair to say that the Panthers' competition this season has been a little light. Still, a 3-1 start has them poised for a solid season in the NFC South. Star running back Christian McCaffery has been upgraded to questionable for this week, but it may not matter if or how much he plays. The Eagles are terrible against the run so it might not really matter, even as good as he is. Either way, look for QB Sam Darnold to be steady in this spot. He has developed a nice rapport with DJ Moore to the extent that Moore has almost twice as many catches as the next leading receiver. The offense is not elite but it works.

The Panthers had been killing it on defense until they went up against the Cowboys last week. But the Cowboys are a very strong offensive team, and the Eagles should be much easier to contain this week. I love the speed the Panthers have on the edge with Haason Reddick and Brian Burns. They are going to need that as they try and corral Hurts.

If you were on the Panthers early in the season there is no reason to jump off just yet. Sure not having McCaffery’s status is something to consider, but that just might make their pricing a little more reasonable. This is a game that the Panthers should win with ease unless Darnold implodes. He has been so good at being steady this season, so there is no reason to think that won’t continue in this spot. Hurts will get some yards, but coming up short in key situations will doom the Eagles.

All they need to do to ensure a push is hit their season average of 24 points per game. That is more than reasonable in a home against a desperate, struggling team. They should cover this one easily. We should not have to sweat it too much in the 4th quarter.

Tonight, the most pivotal game of the 2022 NBA Eastern Conference finals takes place in Boston, with the Miami Heat taking a 2-1 series lead into their matchup with the Celtics. In Game 3 on Saturday, the Heat took control early, outscoring the Celtics 39-18 in the first quarter and leading by as many as END_OF_DOCUMENT_TOKEN_TO_BE_REPLACED