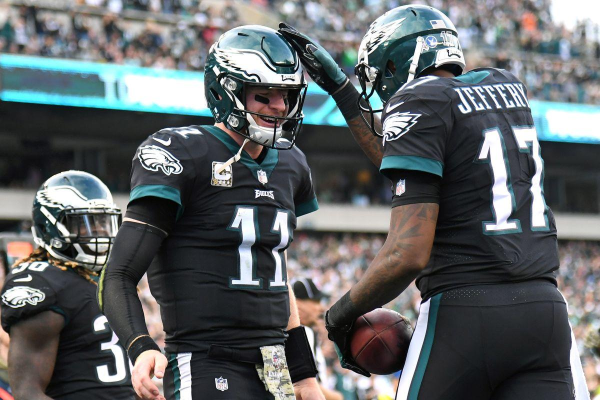 A desperate Philadelphia Eagles team heads west this weekend for a Sunday night game against San Francisco. The 49ers are favored by seven points, with an over/under of 46 points.

At this point, the 49ers are ecstatic to be back home. The team spent the last two weeks playing the Jets and Giants. Kyle Shanahan opted to say on the East Coast  between games rather than making multiple cross-country flights.

The good news is that San Francisco won both of those road games, and now gets to play three straight at Levi’s Stadium. The 49ers are 2-1, but so are the Cardinals and Rams in the division. Seattle has started 3-0.

Few teams are under as much pressure as the Eagles these days. Philadelphia looked like a train wreck in the first two weeks of the season, losing to both Washington and the Rams by double-digits. Last week, the Eagles had to settle for a tie at home against the Bengals.

With October here, Philly is still winless on the season ahead of games against the 49ers, Steelers, and Ravens in the next three weeks. The only silver lining is that no team in the NFC East is better than 1-2, so all is not lost if the Eagles can grab a couple wins.

Much like at the end of the 2019 season, injuries are hindering the Eagles at the moment. The offensive line looks like a mess, allowing 11 sacks in three games, but many of the team’s top playmakers are also banged up. Carson Wentz has struggled as a result, and has been the scapegoat with six interceptions in three games.

Things don’t get easier for Philadelphia this week against the San Francisco defense. The 49ers have also been bitten by the injury bug recently, losing key players on the defensive side of the ball.

San Francisco is still giving up just 15.3 points per game, thanks to wins over the Jets and Giants. Even with a few injuries, the 49ers have a wealth of talent on defense and should be capable of making things difficult for Wentz and the injury-riddled Philadelphia offense.

The 49ers still aren’t sure about the status of Jimmy Garoppolo, who sat out last week’s win over the Giants. If Garoppolo can’t go, backup quarterback Nick Mullens will get another start.

Mullens has been solid thus far, enabling the San Francisco rushing attack to take center stage. That being said Tevin Coleman and Raheem Mostert are also dealing with injuries, although tight end George Kittle is expected to return to the lineup, providing a safety net for Mullens.

The Philadelphia defense has allowed at least 23 points in three straight games, making things easier for the San Francisco offense on Sunday night. On the bright side, the Eagles have managed 12 sacks in three games, which is impressive for a team that’s played behind a lot.

You can never overlook the desperation factor in NFL games, which Wentz and the Eagles clearly have this week. They are also facing a team that has some injuries and will likely be playing a backup quarterback.

While Mullens has played well, he’s not going to be running circles around the Philadelphia defense. This game figures to be close, so take a chance on the Eagles covering the 7-point spread.