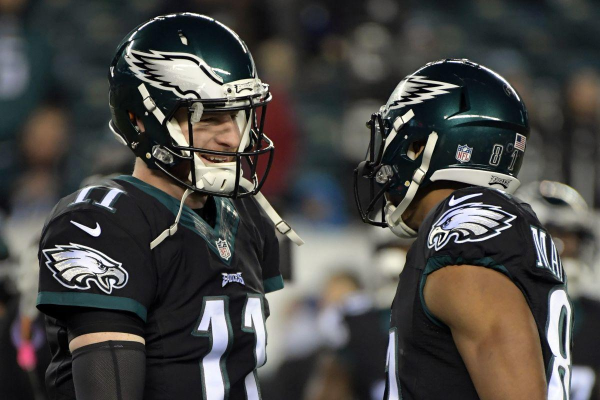 The last of the 4 wildcard games is one of the most interesting as the Philadelphia Eagles (9-7) travel to Soldier Field to take on the Chicago Bears (12-4). For the Eagles, they have lost their starting quarterback (Carson Wentz) for the season and are trying to advance on the back of Nick Foles. Heard that before? Oh yeah, they won a Super Bowl championship with that recipe last season. The Eagles have won 5 of their last 6, including a 24-0 win over the Redskins in week 17, in order to make the playoffs (by the way, they also have to thank the Bears for eliminating the Vikings last week.). Still, they have been playing some great football and ride some momentum coming in.

For the Bears, no one predicted this type of season. Yes, most thought they would be much better under first-year coach Matt Nagy, but people still pegged them for 3rdin the NFC North, behind both the Vikings and the Packers. Instead, they have dominated the year, mostly on the defensive side, and could be a matchup nightmare for most opponents. The Eagles and Bears will lock up Sunday with kickoff scheduled for 4:40 pm ET.

The point spread for this one comes in with the Bears being 6.5-point favorites playing at home. The over/under on total points scored is set at 41.5 points.

With Wentz out, this is Nick Foles’ team. On the season, Foles has thrown for 1,413 yards, 7 touchdowns versus 4 interceptions and has been sacked 9 times. The leading receivers for the Eagles have been Zach Ertz (116 catches, 1,163 yards, 8 touchdowns) and Alshon Jeffery (65 catches, 843 yards, 6 touchdowns).

While the offense has thrived over the last few weeks, this will be the best defense they have seen in the Chicago Bears. They don’t have to bring the blitz consistently to get to the quarterback, and they have had multiple players playing at Pro-Bowl levels. Needless to say, the Eagles’ offense will have its work cut out for them.

On the defensive side, the Eagles are led by Malcolm Jenkins (91 tackles), Fletcher Cox (10.5 sacks) and Rasul Douglas (3 interceptions).

Not only have the Bears been impressive all season, they have been especially dominant at home, going 7-1 on the season. The real dominance for the Bears is in their defense. Trading for Khalil Mack was a game-changer for them. He has dominated and has made those around him (notably Akiem Hicks, Leonard Floyd, Eddie Jackson, Kyle Fuller, and others) better. They would have been a really good defense without him; they are an unbelievable one with him. The leaders on the defensive side are Roquan Smith (121 tackles), Khalil Mack (12.5 sacks) and Kyle Fuller (7 interceptions).

On the offensive side, Mitchell Trubisky will lead them from under center. He has thrown for 3,223 yards, 24 touchdowns versus 12 interceptions and has been sacked 24 times. He has also rushed for 421 yards and 3 touchdowns. His leading receivers are Allen Robinson (55 catches, 754 yards, 4 touchdowns), Taylor Gabriel (67 catches, 688 yards, 2 touchdowns) and Tarik Cohen (71 catches, 725 yards, 5 touchdowns).

Speaking of Cohen, he and Jordan Howard make up a dynamic rushing attack. Cohen has rushed for 444 yards and 3 touchdowns while Howard has gone for 935 yards and 9 touchdowns.

Bears Win, But Question Is If They Cover

I really like the Bears to win in this one. Their defense has been relentless all season, and coach Matt Nagy is great at play calling. I am confident in the Bears, but their ability to cover comes down to Mitchell Trubisky. He has shown times where he can be over-amped and make poor decisions or overthrow his targets (leading to interceptions). If he stays within himself, I think the Bears cover. If the Eagles force some turnovers, it might be a little closer.