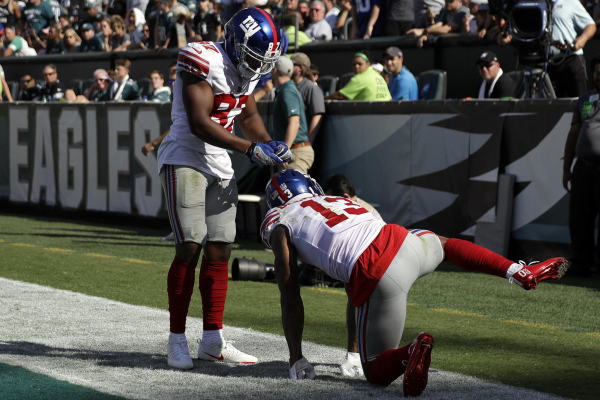 For coming off of a season that ended by hoisting the Lombardi Trophy, this is not how the PhiladelphiaEagles anticipated starting the season.  They currently sit at 2-3 and in third in the NFC East. The one team that they are currently ahead of is the New York Giants (1-4), their opponent this Thursday night.  Still, the nice thing for both teams is that no one is running away with the division early on.

The Cowboys also find themselves at 2-3 and the division-leading Redskins are at 2-2.  Thus, it is still anyone’s division to win. For the Eagles, though, there are still question marks that they will need to figure out moving forward if they hope to succeed, the most pressing one being who will take over at running back long term now that Jay Ajayi is out for the season.

For the Giants, it is about finding some consistency, both on the offensive and defensive sides. The two division rivals will meet up Thursday night when the Eagles travel to MetLife Stadium to take on the Giants. Kickoff is scheduled for 8:20 pm ET.

The spread for this one comes in with the Philadelphia Eagles being slight 3-point favorites on the road.  The over/under for total points scored sits at 44 points.

Eagles Look To Get Back To Being Super Bowl Quality Team

The Eagles have certainly looked like the team that won the Super Bowl, but there are some reasons for optimism.  First, CarsonWentz is starting to get back into form. Well on his way to contending for an MVP award last season, Wentz’ season was cut short due to an ACL injury.  In his last start, though, Wentz went 24 for 35 with 311 yards in the air and 2 touchdowns. On the season, he now has 914 yards, 5 touchdowns and just 1 interception.

His leading receiver is tight end Zach Ertz, who has 41 receptions for 437 yards and a touchdown. The passing game should continue to improve as both Wentz and number one receiver AlshonJeffery work their way back to full strength after starting the season injured.

The Eagles do have a new worry as leading running back Jay Ajayi is now out for the season.  Taking his place will be Corey Clement. This season, Clement has rushed for 112 yards on 27 carries and has one touchdown.  It will be interesting to see if the Eagles, who have to think they are capable of repeating, go out and get a running back on the trade market.

Defensively, the Eagles return most of their starters from last season, but they certainly have not played as well.  In their three losses they have given up 25.3 points per game. That equals the number of times they gave up 25 all season from last year.  The leading defensive stat holders are JordanHicks (32 tackles), Fletcher Cox (3 sacks) and several players with a single interception.

Giants Trying To Work Through Adversity

The last thing that you want during the season is your best receiver candidly putting your quarterback and offense on blast, but that is exactly what Odell Beckham Jr. did.  Despite that headache, there is room for optimism with the offense as they do have weapons. Eli Manning currently has thrown for 1,381 yards with 6 touchdowns and 3 interceptions.

Beckham Jr. has 39 receptions for 462 yards and 1 touchdown while rookie sensation Saquon Barkley has 31 receptions for 274 yards and 2 touchdowns. Barkley also has rushed for 308 yards on 71 carries and another 3 touchdowns on the ground.

One issue they have had is stopping people on the ground.  They are allowing 124.4 yards per game on the ground, but with no JayAjayi, it will be interesting to see if the Eagles can take advantage of this.  The Giants have done pretty well against the pass, as they currently are allowing just 237 yards per game with 6 touchdowns in the air. That will be the true matchup to watch in this one as to whether they can contain Wentz and the aerial attack.

Even without Ajayi, it is hard to bet against the Eagles in this one.  Their defense is too good to play poorly over the entire season, and their offense is probably going to be too much for the Giants to handle.  Between Ertz, Jeffery and Aghlohar, that is a lot of talent to try to be able to contain. Clement has also shown that he is serviceable as a fill-in for Ajayi.  Only giving up 3 points, I will take the Eagles all day long in this one.

After the Novak (or Novax?) Djokovic visa saga dominated pre-tournament headlines, we can finally look forward to some on-court headlines as the Australian Open gets underway. Djokovic news has taken the focus off of the tournament, which is certainly understandable. After all, the fate of the world number one and top seed would significantly impact END_OF_DOCUMENT_TOKEN_TO_BE_REPLACED