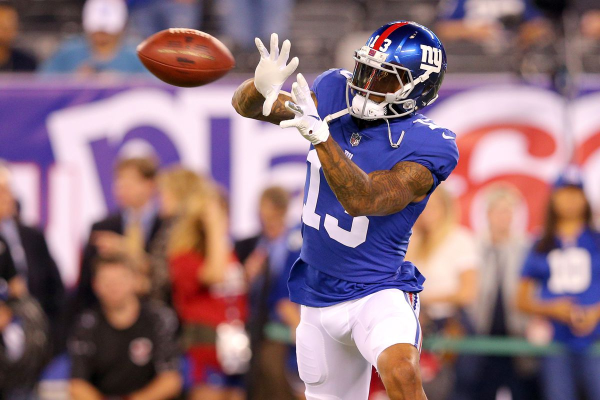 In what promises to be a high-scoring affair in Week 4, the New York Giants will play host to the New Orleans Saints. The Saints are listed as 3.5-point favorites on the road with an over/under of 52 points, which is quite high for an NFL game.

The Giants enter Week 4 1-2 after picking up their first win of the season last week against the Texans. They might have saved their season with that win, as they avoided falling to 0-3, but the Giants may be equally desperate for a win this week. After playing the Saints, New York’s next three games are against the Panthers, Eagles, and Falcons, so dropping to 1-3 with that schedule ahead of them could also doom their chances of competing for a playoff spot this year.

The Saints, meanwhile, are in a little better shape at 2-1, but it hasn’t been pretty. New Orleans lost a shootout against Tampa Bay in Week 1 before being fortunate to survive a game against the Browns in Week 2. Last week, the Saints were forced to come back late and ultimately beat the Falcons in overtime. The Saints are notorious slow starters, so they should be fortunate to be 2-1 because they’re a couple plays away from being 0-3.

Maybe Put in a Little Effort

The New Orleans defense ranks dead last in the NFL in defense. The Saints are giving up more than 34 points per game, even though they held the Browns to just 18 points a couple weeks ago. Surely, that’s something the Giants will hope to exploit this week.

Of course, one major problem the Giants have had this season is their offensive line. A weak offensive line continues to hold them back, as it has in recent seasons as well. The silver lining is that New Orleans doesn’t have a great pass rush outside of Cameron Jordan, who has four of the team’s six sacks this season. If the Giants can contain Jordan and give Eli Manning time in the pocket, the Giants are potentially explosive offensively with playmakers like Odell Beckham Jr., Sterling Shepard, and Saquon Barkley.

Can You Stop It?

While the Saints have been dreadful on defense this season, the NewOrleans offense has been close to unstoppable early in the year. With Mark Ingram still suspended, the running game has been lacking, but Drew Brees has been at the top of his game. Brees is completing over 80% of his passes with eight touchdowns and no interceptions through the first three games of the season.

It’s safe to say that the Giants haven’t seen an offense this dangerous and explosive this season. Facing Houston’s defense last week may have given them a sneak peek of what it’ll be like to face the Saints. The Giants actually managed to keep the Texans under wraps until the 4th quarter, although that will be tough to replicate against the Saints.

Who Do You Trust?

As explosive as the Saints have been this season, it’s also been tough to trust their defense. Even with a weak offensive line, the Giants should be able to keep up with the New Orleans offense. With the spread greater than a field goal, bet on the Giants +3.5 to keep pace with the Saints and perhaps get a win at home.