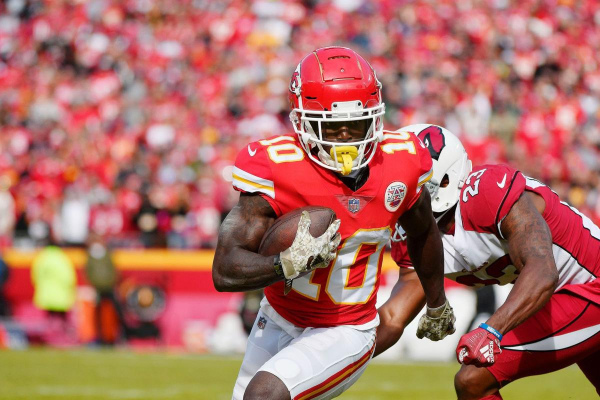 After a lot of waiting and anticipation, the NFL Draft is finally behind us. In case you missed it, let’s catch up on everything you need to know.

Just as the draft was getting started, Chiefs wide receiver Tyreek Hill stole all of the headlines, and not in a good way. A Kansas City TV station aired an audio recording in which Hill’s fiancée accused him of physical abuse directed at the couple’s 3-year-old son. The Chiefs were quick to suspend Hill indefinitely from participating in any team activities. The NFL is also mulling over the possibility of putting Hill on the exempt list, something that is rarely done during the offseason.

Both the league and the NFL Players Union have reviewed the tape. The TV station released the tape one day after prosecutors said they would not be pressing domestic violence charges against Hill because they couldn’t determine if it was him or his fiancée Crystal Espinal who was responsible for hitting their son.

As many expected, the Arizona Cardinals made Heisman Trophy winner Kyler Murray the 1st overall pick in the draft. Picking Murray has seemed inevitable ever since the Cardinals hired Kliff Kingsbury as their head coach. Kingsbury recruited Murray, albeit unsuccessfully, when he was the head coach at Texas Tech, so the two have known each other for a long time. The new Arizona head coach believes Murray is the ideal fit to run his style of offense

Within a day of drafting Murray, the Cardinals turned around and traded last year’s first-round pick Josh Rosen to the Miami Dolphins. Arizona received an extra second-round pick that they used to draft UMass wide receiver Andy Isabella, as well as a fifth-round pick in next year’s draft. Rosen had a bumpy rookie season in Arizona but will get to start fresh in Miami. The Dolphins parted ways with Ryan Tannehill earlier this offseason but did bring in veteran Ryan Fitzpatrick. Rosen and Fitzpatrick will presumably battle during the preseason for the starting job.

The Giants stirred up some controversy among their fan base when they selected Duke quarterback Daniel Jones with the 6th overall pick. Almost nobody foresaw the Giants taking Jones at that point in the draft, so the reaction was strong from fans and pundits alike. In any event, Jones is expected to sit behind Eli Manning for at least a year before taking the reins, although a lot of that could depend on Manning himself.

Including Murray and Jones, there were 11 quarterbacks drafted. Here is a rundown of the more notable quarterbacks selected:

Denver drafted Missouri’s Drew Lock in the second round. Lock will back up Joe Flacco at first, but he’ll give Denver a young quarterback to develop and perhaps push Flacco in the next year or two.

Carolina drafted Will Grier of West Virginia in the third round as an insurance policy behind Cam Newton, whose shoulder was clearly far from 100% at the end of last season.

New England took Auburn’s Jarrett Stidham in the fourth round, giving them a young quarterback to mold just in case Tom Brady retires within the next few years.

After 19 years in the NFL, Sebastian Janikowski is calling it a career. The 41-year-old spent his first 18 seasons with the Oakland Raiders before spending last season with the Seahawks. In his prime, Janikowski was one of the elite kickers in the game and retires with the 10th most points in NFL history.

Sadly, we have to end on a tragedy. Sunday morning, a shooting claimed the life of Dwane Simmons, a defensive back at Division II Washburn University in Topeka, Kan. Corey Ballentine, a cornerback who was selected by the Giants in the sixth round of the draft on Saturday, was injured in the shooting as well. Ballentine’s injuries were non-life-threatening, and the Giants have said his recovery is “coming along fine.” He’s expected to be with the Giants for a team mini-camp on Thursday, although it’s unclear whether he’ll be able to participate. The investigation into the shooting that claimed Simmons’ life is still ongoing.