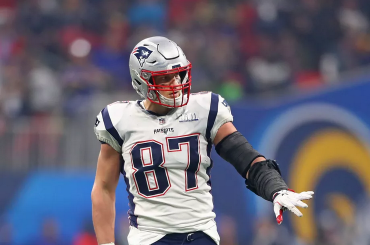 We’re almost into April, but the NFL offseason refuses to slow down. Teams are still out there trying to make moves and get better with the draft still a month away. Let’s take a look at all of the headlines from the past week.

The biggest story of the past week was Patriots tight end Rob Gronkowski announcing his retirement. After nine seasons in the NFL, all spent with the Patriots, Gronkowski is walking away a few weeks shy of his 30th birthday. During those nine seasons, Grownkowski was a five-time Pro Bowler, four-time All-Pro, and three-time Super Bowl winner. He was a generational talent with a skill set that’s incomparable to any other tight end the game has ever seen. There’s also a strong argument to be made for Gronkowski being the best tight end in NFL history.

Just days after being released by the Chiefs, linebacker Justin Houston signed with the Indianapolis Colts. Kansas City passed on paying Houston $15.25 million next year, and he will now make $24 million over the next two seasons with the Colts. The Indianapolis defense, while much improved last season, was in the bottom half of the NFL in sacks. Houston should provide an immediate boost in that department.

Most NFL teams know who their starting quarterback will be in 2019, but there’s still some shuffling to be done with regard to backup quarterbacks. The Texans took care of their vacancy behind Deshaun Watson this week by signing A.J. McCarron to a one-year, $3 million deal. McCarron has posted decent numbers during his NFL careers despite having just 136 career passing attempts as a backup with the Bengals and Raiders. Meanwhile, the Ravens solidified their depth chart behind Lamar Jackson by re-signing Robert Griffin III to a two-year deal. RG3 played sparingly as the team’s no. 3 quarterback last season, but with Joe Flacco being traded to Denver, he’ll get promoted to the no. 2 spot on the depth chart

New Cowboy on the Block

The Cowboys have agreed to a one-year, $5 million deal with longtime Packers wide receiver Randall Cobb. Dallas lost Cole Beasley to Buffalo in free agency earlier this month, creating a need for a slot receiver like Cobb. Injuries limited Cobb last season, but when he’s healthy, he can be a legitimate weapon in the passing game, especially with Amari Cooper and Michael Gallup around to get plenty of attention from opposing defenses.

Running of the Bills

After a one-year absence from Buffalo, E.J. Gaines is heading back to the Bills. Gaines spent the 2017 season in Buffalo before signing with the Browns last offseason. However, his 2018 season was interrupted by a pair of concussions that kept him sidelined late in the year. Gaines is now re-signing with Buffalo for one year and $3.6 million, giving him a chance to compete with fellow free agent signee Kevin Johnson for the starting cornerback spot opposite Tre’Davious White.

With Drew Brees back for at least one more year, the Saints have signed tight end Jared Cook to help them get to the Super Bowl next season. Cook hasn’t officially signed with the Saints yet, although landing in New Orleans appears to be imminent coming off a career-high 896 receiving yards with the Raiders last year. The Patriots reportedly made a late push for him after Gronkowski retired, but Cook is remaining strong in his commitment to join the Saints.

It’s official: the Raiders will play one final season in Oakland before skipping town and landing in Las Vegas. On Monday, NFL owners voted unanimously to approve the team’s lease at the Oakland Coliseum for one more year. The Raiders would also have the option of staying in 2020 if their stadium in Vegas isn’t ready. However, in all likelihood, the 2019 season will be the last for the Raiders in Oakland.

Not Giving Up the Fight

The push for new replay rules continues in the aftermath of the controversy surrounding last season’s NFC Championship Game. The competition committee has proposed two possibilities for instant replay on penalties. One would look at only pass interference while one would look at both pass interference and fouls regarding unnecessary hits and roughing the passer. Ironically, neither would have done the Saints any good in the NFC Championship Game. However, the Washington Redskins have proposed a rule that allows coaches to challenge a non-penalty call by claiming to the referee that a specific player committed a specific penalty. League owners will consider all of the proposals, but in the end, 24 of the 32 teams will need to approve in order to implement any new rule.