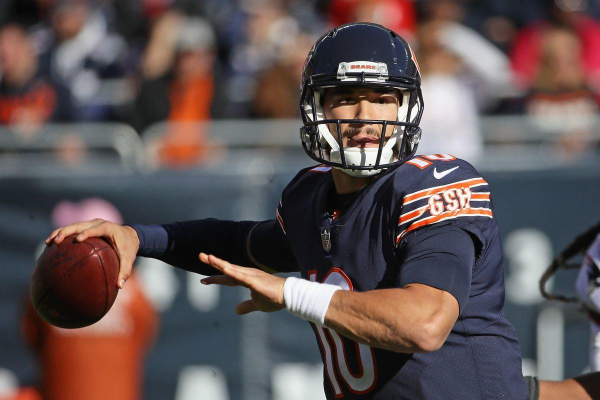 With two weeks left in the NFL regular season, the playoff picture is really starting to take shape, even with so much left to be decided. Let’s recap everything you should know about Week 15 and take a look ahead at Week 16.

The Chicago Bears have become the third NFC team to clinch a division title. With their win over the Packers on Sunday, the Bears secured their first NFC North championship since 2010, officially going from worst to first in their division. Also, with the Rams losing Sunday night, Chicago is just one game out of a first-round bye.

For the Eagles, it’s deja vu all over again. After Nick Foles saved the day last year when Carson Wentz went down with an injury, he may be poised to do that all over again. Foles threw for 270 yards in Philadelphia’s upset win over the Rams Sunday night, giving us a glimpse of a guy who was Super Bowl MVP less than a year ago. The win brings the Eagles within a game of Dallas in the NFC East and a half game within the Vikings for the last wild-card spot. As for Wentz, the Eagles are not putting him on IR just yet, leaving open the possibility of a return. However, Foles will start this week against the Texans.

Changing of the Guard

The Ravens have officially made a quarterback change. Joe Flacco was active this past weekend after recovering from a hip injury, but the Ravens stuck with rookie Lamar Jackson. With Baltimore winning four of five under Jackson, Flacco is likely to remain the backup the rest of the season.

Speaking of the Ravens, they remain the holders of the final wild-card spot in the AFC, but not by much. Baltimore has a tie-breaker advantage over the Colts and Titans, who are also 8-6 with two weeks left to play. Miami’s loss takes them a game back of those three but not completely out of it. The same is true for the Browns, who have won four of their last five and are still alive at 6-7-1.

Over in the NFC, things are just as tight. Seattle’s loss to the 49ers has cost them their cushion atop the wild-card standings. However, they retain the top wild-card spot at 8-6 with the Vikings holding onto the second spot at 7-6-1. However, with the Eagles and Redskins winning to move to 7-7, they remain very much in the hunt. However, just about every other team is out of it, leaving four teams competing for those two spots.

At this point in the season, injuries can be a huge factor in what teams make the playoffs and what teams get left out. Let’s check out key injuries that you should know about for the week ahead:

The Chargers are hopeful that Melvin Gordon will be able to return this week when they host the Ravens. The Bolts have secured a playoff spot, but they also have a chance to win the AFC West and earn the top seed in the AFC. Adam Schefter is reporting there is a “legitimate chance” for both Gordon and Austin Ekeler to play this week. Both were absent during the team’s win over the Chiefs on Thursday.

The Dolphins have slim hopes of a playoff spot, and it’s not going to help that veteran running back Frank Gore is not expected to play again this season. Gore suffered a sprained foot in Sunday’s loss to the Vikings and his availability for the final two weeks of the season is very much in doubt.

The Titans are in the thick of the playoff mix, but they’ll play their final two games without Logan Ryan in their secondary. Ryan broke his fibula on Sunday and will miss the rest of the season. Kenny Vaccaro is also questionable to suit up for Tennessee this week after suffering a concussion.

We’ll close with some good news regarding Washington quarterback Alex Smith. After four weeks in the hospital and several surgeries, Smith is finally going home. Smith’s gruesome leg injury had some complications, as he contracted an infection after requiring multiple surgeries. Whether Smith is able to play again is very much up in the air right now. However, for his livelihood moving forward, his prognosis is positive as he goes home nearly a month after his terrible injury.

Tonight’s NBA betting schedule is lacking in overly compelling matchups, but tonight’s action will also be taking place with a few notable names missing. Booker, Morant, and Lillard Sidelined Tonight and Beyond Booker Out Versus Pistons Due to Hamstring Injury The Phoenix Suns lost Devin Booker (hamstring) on Tuesday against Golden State but closed out END_OF_DOCUMENT_TOKEN_TO_BE_REPLACED