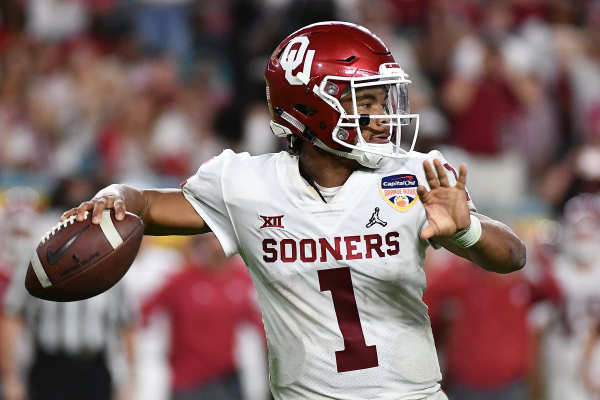 The NFL Draft begins tomorrow, and we all know that if there is anything going on, you can always get some action on it. Betting on the draft is really interesting because the tweet of a local beat reporter can swing the line significantly in either direction, so there is a guessing game of what is true and what is not. I am going to try to break down some things that I have heard and a few ways you can bet the beginning of the draft, and then we can get into some later or unrelated bets.

If you want to bet the draft like everything we say will happen is actually going to happen. Take Kyler Murray at #1 -350. Take Nick Bosa at #2 at -250. Then take Quinnen Williams as a top 3 pick at -130. Maybe the Jets want Josh Allen, but I really think they want to trade out of that spot and most teams value Williams over Allen pretty significantly.

After that, you get into more unknown territory, but we can bet maybe Montez Sweat, Ed Oliver, and Jawaan Taylor unders, and they are three guys that would likely go early if the chalk continues to hit. Sweat’s medical history has popped up as a concern, and the same heart conditions have dropped players before, but I think it may be overblown. Sweat has no family history with the issue, and he also has never really showed symptoms that would limit anything that he does. Some teams won’t want to deal with the question mark, but it is my understanding that most teams think it is not really a big deal.

Now this might be the direction that I go because I think the value is obviously much higher because I would be betting on things that do not happen. Listen, I think betting Kyler Murray as a top 2 pick at -700 instead of #1 at -350 is pretty crazy, and I would consider betting the no on Kyler as a top 2 pick simply because I would hope the Arizona Cardinals do the intelligent thing here. Simply put, trading the 15th, 79th, and 152nd pick for Josh Rosen, then giving him a signing bonus-heavy contract only to then trade him for a 2nd or 3rd rounder and draft Kyler Murray is egregious unless you think that Rosen will never become an NFL starter and Murray is a Hall of Famer.

The Cardinals are horrible, and they need to build a team, so drafting an elite defensive talent or trading out for multiple picks and building their offensive and defensive lines around Rosen is clearly what they should do. Will they? I don’t think so. Is it worth a dart throw at +400? I think so. Let’s face it, Kyler Murray would NOT be -350 to go 1 if there wasn’t a video of Kliff Kingsbury stating that he would take him first overall last season, and I just think that is a bit of value.

Jets trade pick 3 (-112). I really like this bet, especially if we do see Kyler stay on the board after 1. I think the Cardinals would take Bosa or Williams, and the 49ers will take the other. At that point, I do not think the Jets have a ton of conviction about any of these prospects, and they would much rather get more picks to build out a stronger young core. Even if Kyler is off the board as expected, I think the Jets want to do everything they can to get out of that spot.

The biggest shift in the first round to me is where Dwayne Haskins will go. Under 10.5 at (-110) is my favorite bet on the board because I think that too many teams like him to get that far. The Redskins are reported to be “all in.” They are at 15. Do you think they are going to wait until he falls to them and let the Giants, Broncos, Bengals, and Raiders ALL leave him on the board? I don’t think that is logical.

We hear that the Raiders may have a “surprise pick” at 4. Okay. That’s all fun and games and who knows if it’s true or not. What we do know is that the Raiders basically kicked out their scouting department to try and “hide the secret pick.” I hear Ed Oliver, Josh Allen, Hockensen, Metcalf, Brian Burns even.

Now, I agree that most of those could be surprise picks, but I have read from multiple people close to the Raiders that they hear the Raiders “like Haskins” and have Haskins over Murray. Haskins makes the most sense as a secret pick here simply because I don’t think the other ones require secrecy. If the Raiders’ Twitter page posted “We are taking D.K. Metcalf or Ed Oliver or Brain Burns at #4 Thursday night,” would anyone try to trade up to number 3 to snipe their pick? I REALLY don’t think so.

If the Redskins are all in on Haskins, and the Giants have shown a lot of interest at times, do we often see teams sell out to get their QB by trading up so no one takes them? Yes. Do the Jets want to trade out of the third pick and could it be going for relatively cheap because the Jets aren’t in love? Maybe. I think this spot is the biggest key to betting the draft, and I like betting the Jets to trade and then parlaying (if you are allowed to on certain sites) the pick of Haskins at three at (+1200!!!) because I think one of these teams could at least be paranoid that the Raiders take him at 4. You can also afford Haskins at 4 to the Raiders at a really cheap price too.

Greedy Williams (+100) as top corner drafted. Williams is the cleanest DB product in the draft, and I think the price here will only go down.

Montez Sweat drafted at 8 or under (+275). I already discussed Sweat’s medical condition, but I think that the line adjusted for that too much because I think there are NFL teams that are not at all concerned about it. Sweat is a top 8 guy if there aren’t medical issues, and I think this number assumes that it’s a concern that scares everyone off.