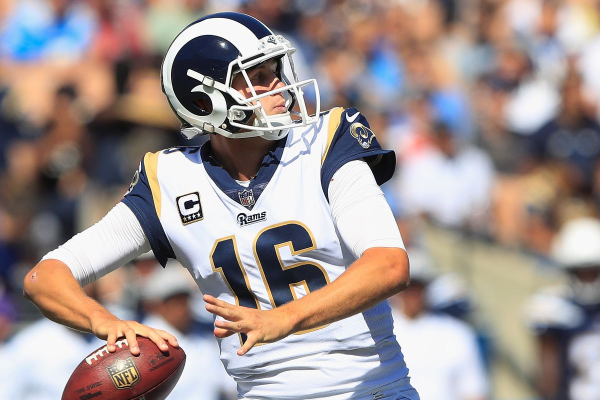 Entering week 9, it is about the point in the season when we can start to truly separate the pretenders from the contenders.  On Sunday, we certainly have a battle of contenders as the undefeated Los Angeles Rams (8-0) travel to the Mercedes-Benz Superdome to take on the New Orleans Saints (6-1).  This matchup features two of the best all-around teams in the league as both are expected to make a deep run in the playoffs. Kickoff is scheduled for 4:25 pm ET.

The point spread comes in with the Los Angeles Rams being a small 2-point favorite on the road.  The over/under on total points scored is 57.5.

For the Los Angeles Rams, their defense has been pretty solid over the first eight weeks and an already potent front seven got even stronger as they went out and acquired defensive end Dante Fowler from the Jaguars at the trade deadline. Headed by Aaron Donald and Ndamukong Suh, the Rams create matchup problems all over the place.  It is for that reason that they currently rank 8th in total yards given up (only 331.4) and 6th in average points given up per game (19.4).  The New Orleans Saints have been a little less impressive on the defensive side. They rank 23rd in total yards given up (374.1) and in opposing points per game (26.1).

The Rams will look to quarterback Jared Goff to keep them perfect on Sunday. On the season, Goff is 171 for 253 with 2,425 yards, 17 touchdowns and just 5 interceptions.  His leading receivers are Robert Woods (46 catches, 672 yards, 3 touchdowns), Brandin Cooks (35 catches, 643 yards, 2 touchdowns) and Todd Gurley (31 catches, 351 yards, 4 touchdowns).  The Rams may also get receiver Cooper Kupp back on Sunday. Despite having missed the last couple games, he has 30 receptions, 438 yards and 5 touchdowns on the season. On the ground, Todd Gurley continues to show why he is the best running back in the league.  Gurley has rushed 169 times for 800 yards and 11 touchdowns.

Defensively, we have already talked about how stellar their front seven is. In fact, last week, they limited Aaron Rodgers and the Green Bay Packers to under 300 yards passing and allowed just one touchdown pass.  The defensive leaders this season are Cory Littleton (46 tackles), Aaron Donald (10 sacks) and John Johnson (3 interceptions).

The New Orleans Saints are one of the toughest teams when playing at home and coach Sean Payton and Drew Brees hope to keep it that way.  On the season, Brees has thrown for 1,990 yards, with 14 touchdowns and only 1 interception. His offensive line has done a nice job keeping him upright as he only has taken 9 sacks to date.  For Brees, his leading receivers are Michael Thomas (58 catches, 669 yards, 4 touchdowns) and running back Alvin Kamara (47 catches, 393 yards, 2 touchdowns). On the ground, the Saints are led by Kamara (92 rushes, 408 yards, 7 touchdowns) and Mark Ingram (41 carries, 148 yards, 2 touchdowns).

On the defensive side, Demario Davis leads the team with 38 tackles. Additionally, Cameron Jordan (5), Sheldon Rankins (4) and Marcus Davenport (4) are all atop the team leaders in sacks while they have a handful of players who all have one interception.

I like the Saints a lot, particularly at home, but right now I just have a hard time betting against the Rams, especially when the spread is only 2 points, essentially making it a straight up matchup.  The Rams are just so stacked on both the offensive and defensive side that even if one is having a bad night the other can pick the team up. It wouldn’t shock me if the Saints give them everything they can handle, but until they show otherwise, I am all in on the Rams this season. Take them at -2 in this one.