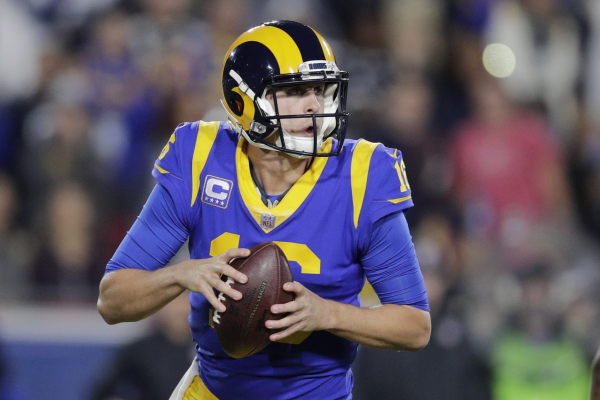 The National Football League has a trio of games on the schedule for Saturday, with the action continuing into Sunday. The San Francisco 49ers will host the Los Angeles Rams on Saturday night in a game that will have huge playoff implications. San Francisco is trying to win the NFC West title this season, and the Los Angeles Rams are still trying to play their way into the playoffs.

San Francisco has been one of the biggest surprises in the NFL this season, and it is one of the top Super Bowl contenders this season. The 49ers come into this game with a record of 11-3 and sit in a tie for first place in the NFC West with Seattle, which owns the tiebreaker.

Los Angeles was a Super Bowl participant a season ago, but this year has been a struggle. The Rams come into this game with a record of 8-6 and still have some work to do if they are going to be a playoff team this season. FanDuel has the San Francisco 49ers as 6.5-point favorites in this NFC West showdown.

Niners Can Score Points In A Hurry

The 49ers don’t have a lot of big names on offense, but they can score points in a hurry. San Francisco is averaging 29.9 points per game this season, making it the second-highest scoring team in the league.

Running the football has been a huge strength of this team as the 49ers are averaging more than 147 rushing yards per game. Quarterback Jimmy Garoppolo has thrown for over 3,400 yards, but plenty of other players have stepped up.

Defense has also been a strength of the 49ers this season, and they will be aggressive in this game. San Francisco has racked up 47 sacks as a team, and defensive end Arik Armstead leads the team with 10 of them. Rookie Nick Bosa has chipped in with nine sacks, and his presence has made a huge difference with this team.

Rams Will Need To Defend

If the Rams are going to win this game, they will need to defend. The Rams gave up 44 points to the Dallas Cowboys in Week 15, and this could be another big challenge.

Cornerback Jalen Ramsey was supposed to transform this defense, but they have given up a ton of huge plays. Defensive tackle Aaron Donald still has 11 sacks this season, but he has not been anywhere near his production from a season ago.

Quarterback Jared Goff has put up some good numbers this season, but he has also struggled with turnovers. Goff has thrown 17 touchdowns to 15 interceptions despite throwing for close to 4,000 yards.

Running back Todd Gurley still has the ability to have a huge game, but he still looks injured. The Rams want to win games with their offense, but that isn’t going to work in this game.

Los Angeles was supposed to be the king of the NFC West this season, but things have not gone as planned. San Francisco has been extremely impressive all season long, and it is not going to be an easy team to deal with at home.

The Rams are going to put up some points in this game, but they just simply can’t outscore the 49ers. San Francisco has been the top team in the division all season long, and they are going to cruise to a victory in this game.

Head to FanDuel and bet on the San Francisco 49ers -6.5 to beat the Los Angeles Rams in a huge Week 16 NFC West showdown.