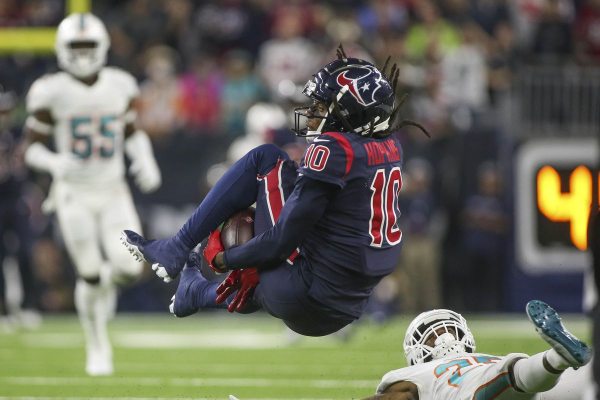 Thursday Night Football features an AFC South showdown as the Indianapolis Colts (6-4) travel to NRG Stadium to take on the HoustonTexans (6-4).  Not only is this a matchup of division rivals, but the winner of this will hold sole possession of the AFC South lead as we progress through the second half of the season.  In what could be a crucial game in determining who ultimately wins the division, both teams will look to be at their best on the short week.  Kickof for this one is scheduled for 8:20 pm ET.

For the HoustonTexans, they are looking for some retribution after losing to the Colts on the road 30-23 a little over a month ago.  Since that time, the Texans have beat the Raiders (27-24) and Jaguars (26-3) while being trounced last week by the Baltimore Ravens 41-7.  With only a handful of days to prepare for this one, the Texans will look to shake off the embarrassment of Sunday’s loss to Baltimore and refocus against the Colts.

For the Indianapolis Colts, it has been a pretty shaky few weeks.  Indianapolis suffered two embarrassing losses losing to the Steelers 26-24 and the Miami Dolphins 16-12.  Last Sunday, they did get on track a bit more against the Jaguars winning 33-13, but it came with a cost.  Running back Marlon Mack broke his hand during the game and he will be out for Thursday night’s game.  In what has become a  “next-man-up” type league, the Colts will look to move forward and take care of the Texans on the road.

The Houston Texans come into this as 3.5-point favorites playing at home.  The over/under for points scored is set at just 45.5 points.

On the offensive side, it is the HoustonTexans that come out ahead in terms of points per game.  They currently rank 10th in the league averaging 24.5 points per game (25.8 at home).  For the Indianapolis Colts, they come in 16th overall averaging 22.7 points (21.5 points on the road).

On the defensive side, it is the Colts who hold the slight edge, although neither team is particularly dominant.  The Colts rank 15th in the NFL allowing an average of 20.6 points per game to opponents (21.5 on the road).  For the Texans, they rank 19th overall allowing 23.2 points per game (21 at home).

After beating the Texans in their first matchup, a win on Thursday would put the Colts directly behind the driver’s wheel in the AFC South.  To do so, though, they will be without star running back Marlon Mack.  On the season, Mack has 192 rushes for 862 yards and 4 touchdowns.  Likely taking his spot on Thursday will be Jonathan Williams. After Mack exited last week’s game, Williams rushed 13 times for 116 yards.  Look for him to get the first opportunity at carries.

Behind center for the Colts will be Jacoby Brissett.  On the season, Brissett is 168 for 260 for 1,797 yards, 15 touchdowns and he has been intercepted 4 times.  The leading receiver for Brissett this year has been T.Y. Hilton, who has 32 catches for 360 yards and 5 touchdowns.  After sitting out last week, though, it is uncertain whether Hilton will be able to go in this one.  If he isn’t, the loss of Mack and Hilton could be crippling to the Colts’ offense.

The HoustonTexans thoroughly believe this is their year to win the division and make a run in the playoffs.  If they are able to take care of business Thursday night, they would definitely be on track to at least take care of the first part of that.  To do so, the Texans will look to franchise quarterback DeShaunWatson to lead them from under center.  On the year, Watson is 230 for 331 for 2,601 yards, 18 touchdowns and 6 interceptions.  He has been sacked an alarming 31 times, but part of that is due to the nature of Watson as a scrambling quarterback.  He has rushed 55 times this year for 291 yards and an additional 5 touchdowns.

The leading rusher this season for Houston, though, has been Carlos Hyde. This year, Hyde has rushed 158 times for 769 yards and 4 touchdowns.  Seen as an afterthought last year, Hyde has fit in nicely with the Texans and has been very productive this year.

Through the air, Watson’s favorite target to date has been De’Andre Hopkins. The All-Pro wide receiver has 75 catches for 745 yards and 4 touchdowns.  In addition to Hopkins, Will Fuller has had a decent campaign hauling in 34 catches for 450 yards and 3 touchdowns.

The Colts are an interesting play, but in my mind there is just too much working against them.  They are 2-2 on the road this year while the Texans are 3-1 at home.  More important, though, is the injuries.  Mack being out could be a huge blow for the Colts’ offense. In addition, if Hilton can’t go again that takes away Brissett’s main threat.  I like what the Colts have done this season, but their backs are against the wall for this one.  Granted, it is Thursday Night Football, which means weird things can happen so adjust accordingly; however, for my money,