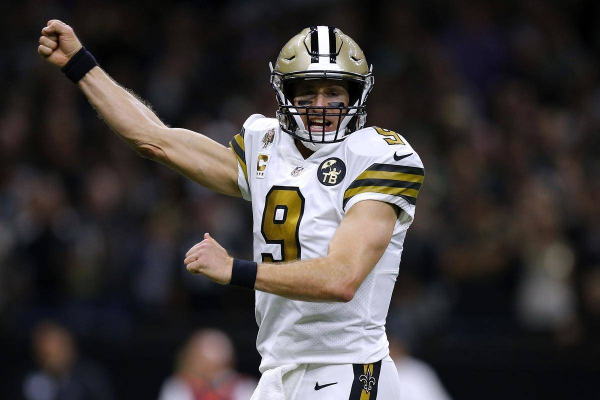 The final game on Thanksgiving Day will be an NFC showdown between the New Orleans Saints and Atlanta Falcons. These are two of the highest scoring teams in the NFL, and there should be plenty of points put up in this game. This is a rematch of a week three battle between these two teams, a game that was won by the Saints, 43-37.

The Saints have won nine straight games after losing their season opener to the Tampa Bay Buccaneers. New Orleans has complete control over the NFC South Division, but are in a tight battle with the Los Angeles Rams for the number one seed in the NFC. Atlanta comes into this game with a 4-6 record and are fighting to keep their playoff hopes alive. The New Orleans Saints are a massive 13-point favorite in this game against the Atlanta Falcons.

The New Orleans Saints are putting up eye-popping numbers on offense this season, and that is the reason for their nine-game winning streak. The Saints are averaging a league-best 37.8 points per game, and are doing it against some of the better teams in the NFL. The Saints have scored at least 45 points in each of their last three games, including victories over the Los Angeles Rams and Philadelphia Eagles. New Orleans put up 43 points against the Falcons in their first matchup, and they should have another big day in this game.

The biggest reason for the Saints explosive offense this season has been the play of quarterback Drew Brees. Brees has completed 76.9 percent of his passes thrown this season, which would set a new NFL record. The veteran QB has thrown 25 touchdowns to just one interception this season and has a variety of talented receivers to throw to. Receiver Michael Thomas has racked up 1,042 receiving yards and eight touchdowns this season, while running back Alvin Kamara has scored 11 touchdowns on the ground.

The Atlanta Falcons still feature one of the best passing attacks in the NFL this season, but they have struggled to find balance. Atlanta is averaging over 314 passing yards per game this season, but just 88 rushing yards per game. Star running back Devonta Freeman has dealt with injuries all season long, which is a big reason for the struggles in the rushing game. The Falcons will need to get their running game going in this contest to keep Drew Brees and the Saints off of the field. Atlanta is giving up 27.6 points per game so far this season, and their defense could get torched by the Saints in this game.

Quarterback Matt Ryan is having another terrific season, but he has not been able to lead his team to many victories this season. Ryan has thrown for over 3,300 yards and 22 touchdowns this season while throwing just four interceptions. Rookie Calvin Ridley has been a huge addition to the Falcons offense this season, catching seven touchdown passes and racking up 532 yards. Star wide receiver Julio Jones is averaging 15.9 yards per catch but has scored just three touchdowns on the season. The Falcons will need a monster performance from the passing game to keep this game with the Saints close.

This is a near must-win game for the Falcons on Thursday, and their veterans will step up and battle the Saints. The Atlanta offense has the ability to put up a huge number of points, and they will need every one of them in this game. The Falcons will keep it close, but no one is stopping the Saints offensive attack this season. Look for this to be a high scoring game, but the Saints will come out on top. Take the points and bet the Atlanta Falcons +13 against the Saints in this game.