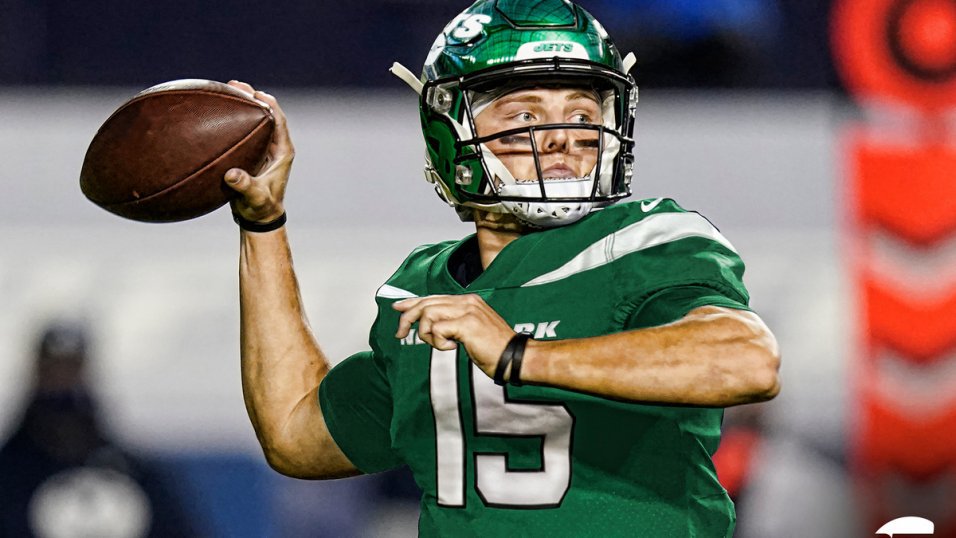 It is hard to find any real positives from the 2020 season for the New York Jets. They were the worst offensive team in the NFL, measured by both yards and points. Oddly, they won two of their last three games, costing them a chance at the top pick in the 2021 NFL Draft. The defense was only marginally better, ranking in the bottom third of the league in most categories. It was the kind of season that leads to an overhaul, and that is what they have done. The only way is up, but don’t look for the Jets to make a major leap this season.

To keep up with the Jets’ results and updated futures odds throughout the 2021 NFL season, check out our dedicated New York Jets page.

New York Jets futures odds are via FanDuel Sportsbook as of Sunday, August 29, 2021.

The biggest addition is the last name on the list. The Jets took Wilson with the second pick in the draft after a monster season at BYU. The name just above him was the second pick they had, a rookie out of USC who looks very ready to play. Wilson has not looked great so far, but it is way too early to evaluate. Davis and Coleman are improvements on the weapons that former QB Sam Darnold had.

The additions of David and Lawson are going to help Saleh implement what he wants to defensively. But he will have to wait until next year on Lawson, who ruptured his Achilles on August 19 and will miss the 2021 season.

Darnold was not working out, and things were getting worse, not better. You can make an easy argument that he was not put in a great position to succeed, which is exactly what Carolina told themselves when they traded for him. These teams meet to open the regular season, and it will be interesting to see how he looks in a different system. Basham and Perriman were reasonably productive players for their positions but not worth prioritizing either.

Things should feel different this season, but don’t forget this team has a long way to go. On offense, they were the worst team in the league last season. They have better personnel this year, but that only matters if Wilson can be functional at quarterback. One thing they should be able to do this season is create more big plays. Corey Davis is a speedster, and Tevin Coleman can take some one-cut runs to the house. I can see this offense being improved this season, but the bar is low.

The defense was miles ahead of the offense last season, but again the bar was set as low as possible. That is Saleh’s specialty, and it must have driven him crazy to go with offense with the first three picks of the draft. After that they selected two linebackers and three corners with the next five picks. Defensive tackle Quinnen Williams is really good in the middle of the defensive line, and they need to find more ways to take advantage of his skills.

New York had just two wins a year ago. Increasing that total seems reasonable. They should be better, but it needs to translate in the win column.

In looking at the futures markets for the Jets, the one to hone in on is the win total.

This win total is too high and presents value on the under. Not only is it more than triple the number of games they won a year ago, but the schedule is harder than it looks, especially with a rookie quarterback.

Carolina and Denver are not heavyweights, but playing them on the road in the first three weeks of the season will be tough. In fact, I only see one road game where I would give them a chance (at Houston), and their game against lowly Jacksonville is late in the season, when the Jaguars should be better than they will be initially. The last two games of the season are at home against the Bucs and at Buffalo. Even if those teams rest players, I still don’t see more than three wins. This is a great under spot.

This is a development season, so there is no reason not to let Wilson learn through failure, which means interceptions. At BYU he was known to take a lot of chances, and you just can’t play that way in the NFL. This one is great value unless he gets hurt.

I doubt we will see much of a turnaround for the Jets this season. There is just too much to fix that it can’t be done so quickly. This is still the worst team in the AFC East, and it is not close. Look to fade the Jets a lot this season.

The 2022 Formula 1 season is only six races deep, but the race for this season’s championship alerady appears to be down to just two drivers. Last season, Red Bull driver Max Verstappen claimed his first Formula 1 World Drivers’ Championship in highly controversial circumstances, with Lewis Hamilton denied what would have been a record-breaking END_OF_DOCUMENT_TOKEN_TO_BE_REPLACED