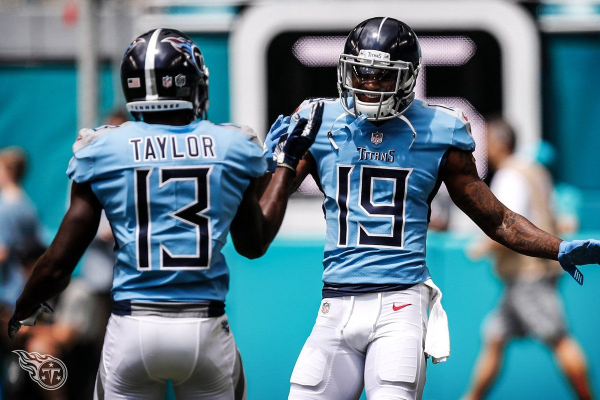 On Sunday, it will be a matchup of coach versus former player as Bill Belichick and the 7-2 Patriots travel to Nissan Stadium to take on Mike Vrabel and the 4-4 Tennessee Titans.  For the Patriots, they have not lost since week 3 when they lost 26-10 to the Detroit Lions. In fact, since that time, they have not scored fewer than 25 points in any game and have only been fewer than 30 once.  Ironically, that loss was also to someone who used to have former ties to Belichick as former Patriot defensive coordinator Matt Patricia is now the Lions head coach. For the Titans, they are coming off of a 28-14 victory over the Dallas Cowboys, but they have struggled to find consistency all season long.  They have scored 20 or fewer points in 6 of their 8 games. The two will square off with one another on Sunday with kickoff scheduled for 1:00 pm ET.

The point spread comes in with the New England Patriots being 6.5-point favorites on the road.  The over/under on total points scored is a low 47 points.

Having won 6 in a row, the Patriots are looking to keep it rolling as they head into their week 11 bye week.  Under center, Tom Brady continues to show he is one of the best in the game. On the season, he has thrown for 2,494 yards with 17 touchdowns and 7 interceptions.  His leading receivers have been running back James White (61 catches, 531 yards, 6 touchdowns), Julian Edelman (31 catches, 322 yards, 2 touchdowns) and Rob Gronkowski (29 catches, 448 yards, 1 touchdown).  For Gronkowski, it appears that he is making the trip to Tennessee, but many anticipate that he will still not play, as the Patriots probably prefer to give him an extra couple weeks with the bye coming up.

On the ground, Sony Michel has led the way with 95 rushes for 422 yards and 4 touchdowns.  After sitting the last couple games, it is expected that he will probably suit up for this one.  James White (60 rushes, 235 yards, 4 rushing touchdowns) and Cordarrelle Patterson (28 rushes, 135 yards, 1 touchdown) have also chipped in.

Titans Looking To Get Above .500

As mentioned before, the Titans‘ calling card has been their defense this year. The stat leaders this year on that top-ranked defense have been Jayon Brown (37 tackles and 4 sacks), Jurrell Casey (3.5 sacks), Kevin Byard and Adoree’ Jackson (2 interceptions each). While they have been stingy giving up points thus far, they will have their work cut out for them against the Patriots offense.

For the Titans offense, it has been a rough season for quarterback Marcus Mariota and the rest of the squad.  Mariota has thrown for just 1,270 yards, throwing just 5 touchdowns, 5 interceptions and he has been sacked 23 times. His leading receivers are Corey Davis (36 catches, 451 yards, 1 touchdown) and Dion Lewis (33 catches, 259 yards, 1 touchdown).  On the ground, Dion Lewis and Derrick Henry have split the carries with Lewis having 92 rushes for 339 yards and a touchdown while Henry has 90 rushes for 300 yards and 2 touchdowns.

Patriots Make It 7 In A Row

The problem for the Titans is I don’t think their offense will stay on the field long enough to give their defense a break.  While the defense might hold up initially, I think the Patriots will wear them down in this one, not only winning outright but covering the 6.5-point spread as well.