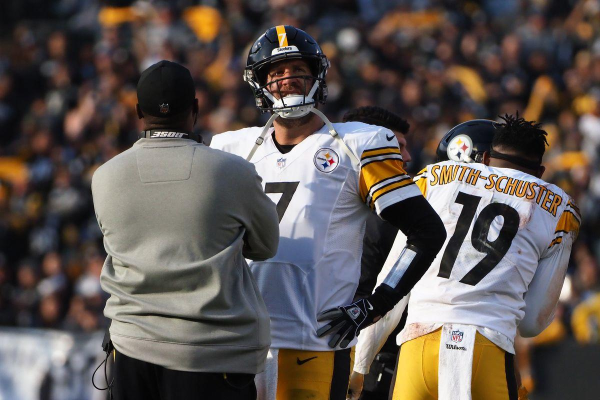 Sunday will feature two of the best quarterbacks over the last decade squaring off as Tom Brady and the New England Patriots (9-4) travel to Heinz Field to take on Ben Roethlisberger and the Pittsburgh Steelers (7-5-1). For the Patriots, they are coming of an embarrassing 34-33 loss to the Dolphins, one which featured a game-ending play that will go down as one of the craziest in a long time. While the Patriots have been mostly dominant this year, their 4 losses all have come on the road. For the Steelers, they have been spiraling downward lately. After starting the season 7-2-1, they have lost 3 in a row, including a 24-21 loss to a miserable Oakland Raiders team last week. Still, the two will play Sunday with kickoff scheduled for 4:25 pm ET.

The point spread comes in with the New England Patriots being 2.5-point favorites despite playing on the road. The over/under on total points scored is set at 54 points.

On paper, these two teams are pretty similar. When it comes to defense, Pittsburgh does rank better than the Patriots in terms of average total yards given up to opposing offense. Pittsburgh comes in at 8th (330.8 yards) while New England comes in at 22nd (372.5 yards per game). Despite that discrepancy, the Patriots actually rank higher in average points given up. They come in at 12th in the NFL, giving up 22.5 points per game while the Steelers come in at 16th, giving up 23.5 points per game.

The New England Patriots are looking for their tenth win of the season and to do so, they will turn to the ageless Tom Brady under center. This season, Brady has thrown for 3,700 yards with 23 touchdowns versus 8 interceptions. He has also been sacked just 18 times this season. His leading receivers on the year have been Rob Gronkowski (637 yards and 3 touchdowns), Julian Edelman (621 yards and 4 touchdowns) and James White (674 yards and 6 touchdowns).

Speaking of White, he and Sony Michel lead the attack out of the backfield. Michel has rushed for 706 yards and 5 touchdowns on 164 carries this season. White has added 342 yards and 4 touchdowns on 80 carries.

Defensively, the Patriots are led by Kyle Van Noy in tackles (83), Trey Flowers in sacks (6.5) and Jonathan Jones in interceptions (3).

After suffering a vicious hit last week that led to rib contusions, there was initially some concern that Ben Roethlisberger might not play this week. After sitting out Wednesday, Big Ben returned to practice Thursday and Friday is a go for tomorrow. On the season, he has thrown for 4,227 yards, 28 touchdowns versus 13 interceptions and has been sacked 18 times. His leading receivers are JuJu Smith-Schuster (1,234 yards, 6 touchdowns) and Antonio Brown (1,063 yards, 12 touchdowns).

On the ground, there is a bit more uncertainty. James Conner is currently listed as questionable, but there are serious doubts as to whether he can go or not. On the season, he has rushed for 909 yards and 12 touchdowns. If he can’t go, it will be a combo of Jaylen Samuels (59 yards rushing) and Stevan Ridley (60 yards, 1 touchdown).

Defensively, the Steelers are led by Sean Davis in tackles (51), T.J. Watt in sacks (10) and have several players who have one interception apiece.

Pittsburgh Wins In A Shootout

First, I have to put the caveat in that I am taking Pittsburgh IF there are no last second issues that might prevent Roethlisberger from playing. I don’t anticipate it, but I do want to put that out there knowing he is coming off an injury last week. If for some reason he is a no-go, I am definitely taking the Patriots. With that out of the way, I look for a bounce back game from Roethlisberger and the Steelers. They have dropped 3 straight, but I don’t anticipate them dropping a 4th, especially playing at home. Also, New England has lost all 4 of their games on the road, so they seem to be susceptible away from Gillette Stadium. I do think this is a shootout so take the over, but I am taking Pittsburgh and the points in this one. Take Steelers +2.5.