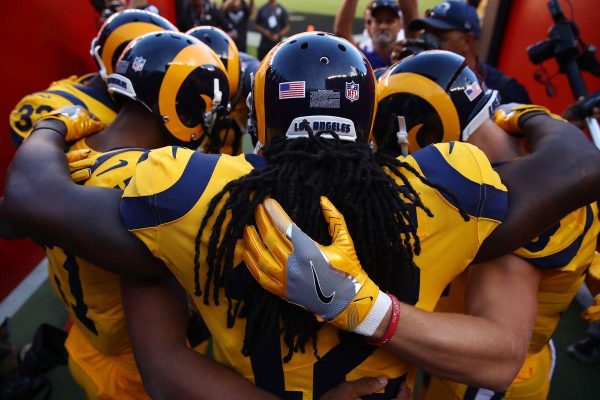 This is perhaps the best Monday Night Football matchup of the season as it features two teams who are 9-1 and have their sights fixed directly on the Super Bowl. In this contest, the Kansas City Chiefs will be traveling to Los Angeles Memorial Coliseum to take on the Los Angeles Rams. This game was originally scheduled to be played at Estadio Azteca in Mexico City, but with unfit playing conditions, it was moved to L.A.

The point spread comes in with the Los Angeles Rams being 3.5-point favorites at home. Knowing that teams usually get 3 points in their advantage just for being home, this is basically a coin flip game. The over/under on total points scored is set at 63 points.

On the defensive side, there does seem to be a slight advantage for the Rams. They rank 13thin total yards given up (355.2) versus the Chiefs who are allowing an average of 410.7. Despite the difference in yardage, though, the average points allowed is not too far off as the Rams rank 12th, allowing 23.1 points per game while the Chiefs are 16th, allowing 24.

Offensively, they are also pretty neck and neck. The Rams rank 2nd in total offense with an average of 448 yards per game, but the Chiefs are right behind them at 3rd with 423.1. Those numbers are flipped when you look at points per game as the Chiefs rank 2nd with 35.3 points and the Rams are 3rd with 33.5.

Chiefs Will Look To High Flying Offense For Success

Patrick Mahomes has been sensational this season. He has thrown for 3,150 yards, 31 touchdowns versus just 7 interceptions. He has also been mostly upright, as he has only been sacked 17 times. He is particularly good at spreading the field as he has weapons galore around him. His top receivers are Travis Kelce (57 catches, 787 yards, 6 touchdowns), Tyreek Hill (55 catches, 891 yards, 9 touchdowns) and Sammy Watkins (39 catches, 515 yards, 3 touchdowns).

The Chiefs have a good ground game as well. Kareem Hunt has rushed for 754 yards and 7 touchdowns on 167 carries. He has also added 337 yards receiving and 6 touchdowns out of the backfield on 23 catches.

Rams Look For Win In Front Of Home Crowd

Just like the Chiefs, the Rams’ offense has been rolling this season, in large part due to coach Sean McVay and quarterback Jared Goff. On the season, Goff has thrown for 3,134 yards, 22 touchdowns, 6 interceptions and has been sacked 19 times. His leading receivers are Robert Woods (55 catches, 832 yards, 3 touchdowns) and Brandin Cooks (51 catches, 857 yards, 3 touchdowns). It is worth noting, though, that the Rams lost a significant weapon as Cooper Kupp is out for the season as he had ACL surgery.

On the ground, the Rams have the best in Todd Gurley. Gurley has rushed for 988 yards and 13 touchdowns on 198 carries. He has also added 402 yards receiving and 4 touchdowns on 40 catches.
Defensively, the leaders for the Rams are Cory Littleton (59 tackles), Aaron Donald (12.5 sacks) and John Johnson (3 interceptions).

I would be lying if I said that I haven’t gone back and forth on this one. In fact, I have written a winner, changed my mind, and rewritten this section a handful of times already. As a result, I have to go with the team being spotted the points. Kansas City already has an extremely potent offense; so to spot them 3.5 points is too much for me to pass on. Take the Chiefs and the 3.5 in this one.