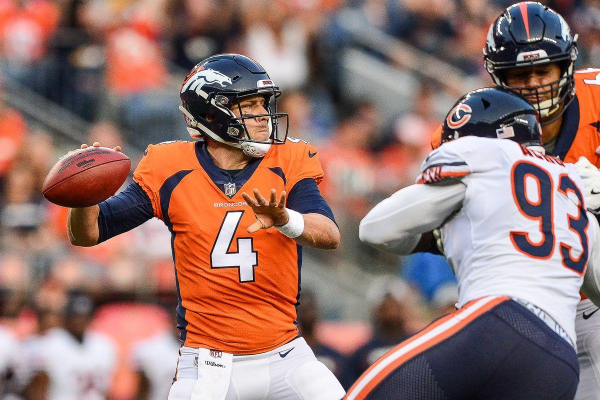 Christmas Eve will deliver an underwhelming Monday Night Football matchup that features the Denver Broncos (6-8) traveling to the Oakland Alameda Coliseum to take on the Oakland Raiders (3-11). Both teams have been eliminated from playoff contention and don’t have much to play for in this game except for pride. For the Broncos, they lost two games in a row including a 17-16 loss last week to the Browns and a 20-14 loss to the 49ers the week prior. The Oakland Raiders also lost last week to the hapless Cincinnati Bengals, 30-16. For the Raiders, this season has seemingly been more about playing for a high draft pick than winning at all. Still, the two teams will square off Monday night with kickoff scheduled for 8:15 pm ET.

The point spread for this one comes in with the Denver Broncos being 3-point favorites despite playing on the road. The over/under on total points scored is set at 42 points.

Neither of these teams are exactly dominating the team statistics (probably why they are both out of the playoffs). On the defensive side, the Broncos rank 25th in the league, allowing 378.1 total yards to opposing offenses. The Raiders come in right behind them, ranking 26th and allowing 385.2 yards per game. Despite the yards given up, the Broncos rank 10th in points allowed per game, only allowing an average of 21.4. For the Raiders, they rank dead last, allowing 29.9 points per game.

Under center, the Broncos turn to Case Keenum. On the season, Keenum has thrown for 3,396 yards, 15 touchdowns versus 12 interceptions. He has also been sacked 32 times. Unfortunately, between injury (Emmanuel Sanders) and trade (Demaryius Thomas), the wide receiving corps has been depleted. Still, the Broncos have Courtland Sutton (35 catches, 614 yards, 3 touchdowns) and Phillip Lindsay (33 catches, 230 yards, 1 touchdown out of the backfield) leading the way for receiving.

Oakland Just Trying To Make It Through Last Two Game

The first year of Jon Gruden’s 10-year pact has been one to forget for the head coach. His team has struggled on both sides of the ball, and he is hoping for a reboot after acquiring lots of draft picks for next year’s draft. This season, though, there have not been too many bright spots. Under center, Derek Carr has seemingly regressed a bit. He has thrown for 3,697 yards, 19 touchdowns, and 8 interceptions. Part of the problem, though, is the offensive line’s inability to keep him upright. He has been sacked a whopping 47 times. That could be an issue this game with both Von Miller and Bradley Chubb across the line.

His leading receivers this season have been Jared Cook (63 catches, 848 yards, 6 touchdowns) and Jalen Richard (62 catches, 550 yards). Unfortunately, the Raiders have had some veterans in skill positions who have either been ineffective (Jordy Nelson) or injured (Marshawn Lynch). Since Lynch’s injury, Doug Martin has taken over duties in the backfield. He has 516 yards and 3 touchdowns on 130 carries.

Bet The Broncos To Win And Cover

As I mentioned earlier, the Raiders seem to be playing for a high draft pick. Between their play on the field and some of the decisions off the field (notably the trades of Khalil Mack and Amari Cooper), they just seem to be in a full rebuilding mode on Jon Gruden. Throw on top of that the fact that Oakland’s defense has been atrocious, especially against the run, and I think the Broncos will have no problem scoring. I expect big days from the Broncos backfield en route to a comfortable win. Despite that, I don’t see a ton of points being put up so, for my money, I would take the Broncos -3 and take the under on total points.