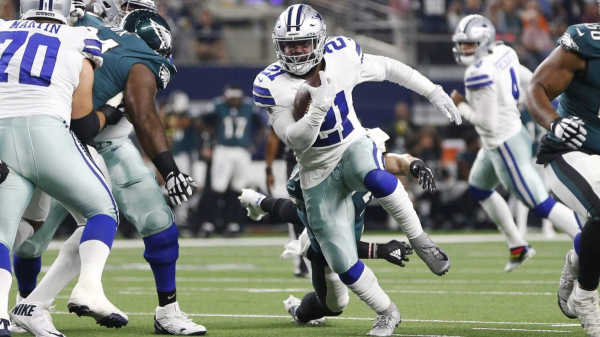 Monday Night Football features a battle of NFC East rivals as the Dallas Cowboys (4-3) travel to MetLife Stadium to take on the New York Giants (2-6). Currently, the Cowboys lead the division, but with the Philadelphia Eagles at 5-4, anything can still happen in the second half of this season. Kickoff for this one is scheduled for 8:15 pm ET.

The Cowboys are coming into this one with extra time to prepare as they are coming off their bye week. In the week prior, they easily disposed of the Eagles 37-10 at home. Looking to use the momentum and the rest of the bye week to their advantage, the Cowboys will try to essentially eliminate the Giants from any playoff hopes on Monday.

For the Giants, while they wanted to be competitive early on, this year has turned into a bit more of a rebuilding year. Daniel Jones, their first-round pick, has taken over the job at quarterback but has done so to inconsistent results. Still, the Giants are hoping that the more reps he gets, the more comfortable he will be under center. One thing is for sure, even though Saquon Barkley has been hampered by injuries a lot this season, New York certainly doesn’t want to waste his prime years.

The Dallas Cowboys come into this as seven-point favorites despite playing on the road. The over/under for points scored is set at 48.

On the defensive side, it is once again the Cowboys that come in way ahead. They rank seventh in the league, allowing just 17.7 points per game to opponents (19 on the road). The Giants come in at 27th overall, allowing 27.2 points per game (21.5 at home).

Dallas Looks For Another Division Win

At 4-3, the Cowboys have come back to reality a bit after a 3-0 start to the season. Despite the regression, they still hold the top spot in their division and will look for another win against the rival Giants Monday night. Leading the way for the Cowboys under center will be Dak Prescott. On the season, Prescott is 168 for 238 for 2,123 yards, 12 touchdowns and seven interceptions. In seven games, he has been sacked 10 times. On the ground, Prescott has rushed 24 times for 163 yards and another three touchdowns.

Prescott’s leading receiver to this point has been Amari Cooper, who has 38 catches for 621 yards and five touchdowns. Ezekiel Elliott has also contributed from the backfield, catching 24 passes for 176 yards.

Elliott leads the way for the Cowboys on the ground with 135 rushes for 602 yards and six touchdowns. As a whole, the Cowboys offense has the ability to consistently put up points and will certainly be a test for the Giants Monday.

After having a pretty good game against the Detroit Lions last week, the Giants and their fans are hoping that this is a sign of things to come for Daniel Jones. On the season, Jones is 135 for 216 for 1,466 yards, 10 touchdowns and seven interceptions. He has also been sacked a whopping 21 times already.

Jones’ best receiver has been tight end Evan Engram thus far, with 38 catches for 419 yards and three touchdowns. The next highest receiver thus far has been Sterling Shepard, but he has now missed a few games in a row due to a concussion and is questionable again Monday night.

On the ground, Saquon Barkley continues to lead the way. Despite struggling with some injuries, he has rushed 74 times for 373 yards and two touchdowns. He has also caught 22 passes for 161 yards and another touchdown. Still, he has seemingly still been battling with nagging injuries and may not be at 100 percent Monday night, although he is expected to play.

There is not a lot to love with the New York Giants right now. Barkley still doesn’t seem 100 percent healthy (since returning from an ankle injury he is averaging less than four yards per carry). In addition to that, Jones hasn’t exactly taken the league by storm. Granted, he did throw for 322 yards and four touchdowns against the Lions, but they have the worst pass defense in the league, and the Giants still lost that game.

Against Dallas, he is likely to see much stiffer competition from their secondary. Ultimately, I think that Dallas will be too much for the Giants on both sides of the ball, and I think that they not only win this game straight up, but they also cover the seven-point spread. For my money, I am taking Dallas -7.