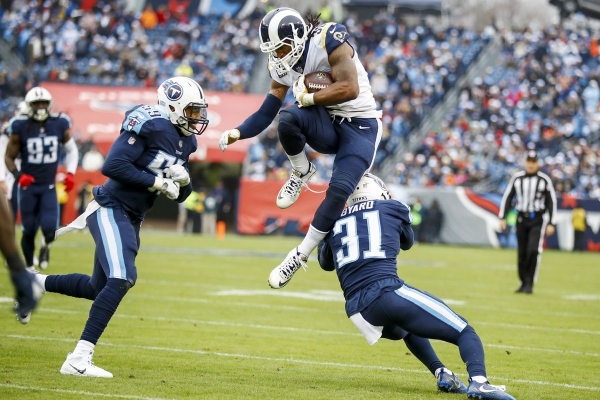 UPDATE 3:00pm EST – the spread at most sportsbooks is now at 5.5 which is getting borderline, however we still recommend the Rams for tonight.

The Rams are coming off a year that saw them reach the playoffs before falling to the Falcons 26-13. They finished 11-5 in the regular season and had high hopes going into the playoffs with a fresh armed quarterback in Jared Goff. Last year, Goff threw for 3,804 yards and 28 touchdowns.

Over the second half of the season last year Goff led the NFL in passing touchdowns, he will look to continue that trend then year early on. Goff is an above average quarterback and with a weapon like Todd Gurley in the backfield, his arm will open up a ton of opportunities this year in the passing game.

Gurley ran for 1,305 yards last year and had 13 touchdowns. He also had 64 catches for 788 yards which put him over 2,000 total yards on the season. With Gurley being a threat it really opens up the offense for coach Sean McVay. The defense leaves a little to be desired but with the offense that can put up almost 50 points every night, you don’t have to worry about the defense that much.

The defensive line is back and better than ever and look to create a pass rush that will disrupt opposing offenses. The two defensive tackles of AaronDonald and Ndamukong Suh will eat up opposing running backs so they will be looking to defend the pass more often than not this year.

The Raiders bring a fresh face onto the coaching staff as JonGruden is now out of the announcing booth and onto the field as a head coach once again. Derek Carr is a guy that has been full of potential his whole career but hasn’t really harnessed it. Gruden will look to mold Carr into a guy who is going to be a top NFL quarterback. Last year, Carr threw for 3,496 yards and 22 touchdowns but he also threw 13 interceptions.

You can expect that number to be down this year. Marshawn Lynch returns to the team at running back a year after posting 891 yards on the ground. Lynch should be utilized heavily this year in hopes of opening up the passing game for Carr. The defense isn’t very good.KhalilMack is now gone, and they struggled last year holding opponents down. With a defense that is a little rough around the edges, Oakland will be in a few shootouts this year.

Look for the Rams to score early and often. The Rams defense is much better than the Raiders and the Rams are a team that you don’t want to get into a shootout with. They could put up some crazy numbers tonight as they look to start off where they left off. Take the Rams -4.5 as this has the potential to be a high scoring affair for one team. Don’t be surprised if the Rams hang 40 on the Raiders.