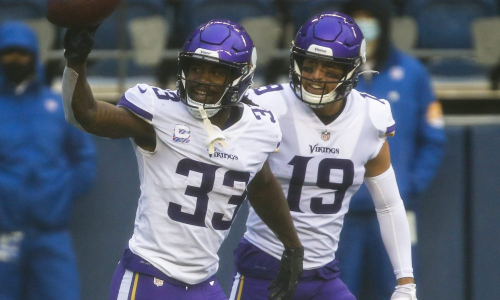 It is the clash of the division rivals. The showdown between two teams struggling at the bottom of the NFC North division. Come Sunday, Detroit Lions will take on the Minnesota Vikings at 1 PM ET, the 8th of November, at the US Bank Stadium, Minneapolis, USA, and the match will be covered by the CBS network.

Minnesota Vikings looking for another win

The Minnesota Vikings are in the last place in the division but are feeling revived with their 28-22 victory over the Green Bay Packers in week 8. The teams were tied at halftime, but the Vikings broke away, scoring two touchdowns in the third half. In the game, running back Davin Cook ran for 163 yards, received for 63 yards, and scored 4 touchdowns. The team rushed for 11 first downs with 173 rushing yards and 151 passing yards.

In offense, the Minnesota Vikings hold the advantage, although ranking last in the NFL, just below the Detroit Lions, having an average of 25.0 points per game. Kirk Cousins have been quite impressive this year, passing for a total of 1,635 yards, scoring 12 touchdowns, with 10 interceptions. Running back Davin Cook is the leading rusher for the Vikings, running 652 yards and scoring 10 touchdowns. Defensive end Ifeadi Odenigbo has 9 solos and 2.5 sacks, and linebacker Eric Wilson has 21 solos, 2 sacks, 1 FF, and 2 interceptions. The team has a total average of 372 yards per game.

On defense, the Minnesota Vikings have allowed an average of 15.5 points per game, 310.3 average in total yards, with 218.8 in passing yards, 91.5 in rushing yards, and forcing 10 turnovers.

The Minnesota Vikings will be vying to win in this match and make it out of the last place. However, the team has some players unavailable due to injuries and health complications, including Cameron Dantzler (concussion), Mark Fields II (chest issues), Harrison Hand (hamstring), Holton Hill (foot injury), Dan Chisena (hip), CJ Ham (shoulder injury), and Adam Thielen (shoulder injury). Despite the uncertainty of the availability of these players, we believe the Minnesota Vikings will give it their all to move up on the league table.

The Lions vying for a comeback

The Detroit Lions will be coming into the matchup after suffering a defeat at the hands of the Indianapolis Colts in week 8 with a 41-21 final score. The loss brought the team to a 3-4 record. In that game, quarterback Matthew Stafford threw for a total of 336 yards with 3 touchdowns and 1 interception. While running back, Jamal Agnew rushed for 11 yards with 1 attempt, and wide receiver Marvin Hall secured 4 passes for 113 yards.

The Detroit Lions, ranking penultimate in the NFL, has 23.8 points per game average, and 413.8 average allowed in total yards, 280 in passing yards, and 1333.8 in rushing yards. The Detroit quarterback has quite the record throwing for a total of 42.,941 yards, scoring 269 2touchdowns, with 139 interceptions. Adrian Peterson, the Detroit Lion’s leading rusher, has raced 321 yards, scoring 2 touchdowns with 85 attempts. Defensive end Romeo Okwara has 18 solos, 5 sacks, and 1FF.

While, the Detroit Lions have allowed 23.6 points per game and 413.8 average in total yard allowed, with 280.0 in passing yards and 133.8 in rushing yards. The Lions are going into this match without their best downfield threat, Kenny Golladay, who has been declared out for the week 9 fixture.

The Lions will be looking to bounce back from their recent defeat, despite the odds being against them, as they have a number of star players whose availability for Sunday’s game is in doubt, including Jamal Agnew (ribs), Taylor Decker (back), Kenny Golladay (hip), Halapoulivaati Vaitai (foot), Tracy Walker (foot), Joe Dahl (back), T.J Hockenson (toe), Christian Jones (knee), Darryl Roberts (hip/groin), Danny Shelton (wrist), and Desmond Trufant (hamstring). With these players possibly out, we are not quite sure what to expect from this team.