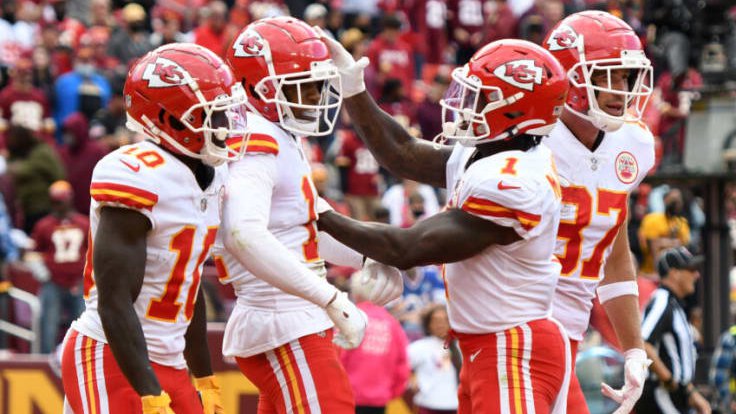 The Titans took down one AFC favorite on Monday night as they rallied to beat the Buffalo Bills. Can they pick up another big home win over a top AFC team this week? The short week isn’t in their favor, and neither are the NFL betting odds for the Chiefs’ visit to Nashville.

Kansas City might be finally putting it together. They probably played their best half of the season in the second half against Washington last week.

Thanks to their early-season struggles and perhaps also due to the Titans’ win over the Bills, the Chiefs are not getting lots of respect in this matchup. They still look like the sharp side to me though.

Kansas City Chiefs odds are via FanDuel Sportsbook as of Saturday, October 23, 2021 at 6:20 p.m. ET. Want to see NFL betting odds from several top online sportsbooks for every NFL matchup each week? Check out our NFL odds.

The Chiefs were losing at halftime last week but responded by outscoring Washington 21-0 in the second half. You have to consider the opponent, but it is the best they have looked over an extended time this season. Perhaps this is where they start their surge.

The only reason to hesitate with the Chiefs is that Patrick Mahomes is turning the ball over. He has interceptions in 5 straight games. If he cleans that up, which history says he will, the wins are going to start getting easier. With eight interceptions already, he has thrown more picks than he did in either of the last two seasons.

While their defensive performance against Washington was nice and needed, this is going to be a tough matchup for a defense that has been bad overall this season. Tennessee is dramatically better than Washington on offense, but at least the Chiefs have a little confidence on defense coming into this game.

It is imperative for Mahomes and the offense to be successful in order to put pressure on the Titans when they have the ball.

Tennessee knows what it is good at. They can run the ball with Henry, and they have physical receivers in AJ Brown and Julio Jones that can make makes plays for Ryan Tannehill.

This offense was sneaky good last season and is again this year, averaging 28 points per game. It is not usually anything fancy, but it just works. And once you get past your reservations about Tannehill, you can appreciate they actually have a really good set of skill personnel. There is a lot to like when the Titans have the ball.

The key for the Titans, just as it is for the Chiefs, is to find some positive consistency on defense. Sure they won last week against the Bills, but they still surrendered 31 points at home. Injuries have made them really thin in the secondary, and that is a major concern against Mahomes. Outside linebacker Harold Landry is emerging as one of the best pass rushers in the NFL, and they are going to need him to apply pressure all game long or Mahomes will feast.

This line has come down more than a full point from the opening line. It seems that there might be some recency bias as lots of folks saw what the Titans did against the Bills.

In my mind that is a game they probably should have lost, so I am happy to side with Kansas City. The Chiefs are going to really enjoy playing against a light Tennessee secondary, and Mahomes should have a very productive day. Early scores will enable the Chiefs to be really aggressive on defense, creating a mistake or two that gives them a nice working margin.

Brown was supposed to be limited last week but had a big game against Buffalo with seven catches for 91 yards. The Chiefs are not nearly as good on defense as the Bills are, so look for comparable numbers.

The 2022 Formula 1 season is only six races deep, but the race for this season’s championship alerady appears to be down to just two drivers. Last season, Red Bull driver Max Verstappen claimed his first Formula 1 World Drivers’ Championship in highly controversial circumstances, with Lewis Hamilton denied what would have been a record-breaking END_OF_DOCUMENT_TOKEN_TO_BE_REPLACED