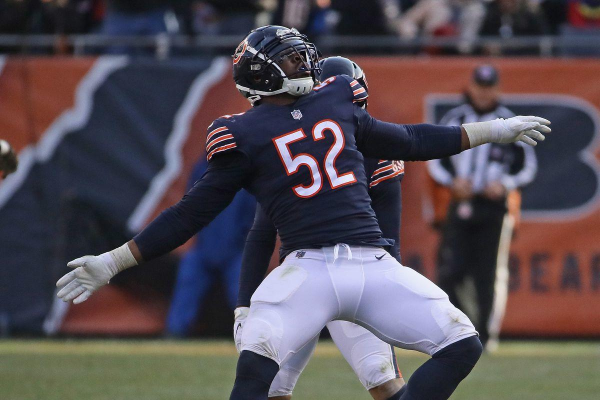 The Chicago Bears will host their longtime rival the Green Bay Packers on Sunday afternoon in Soldier Field. You can expect the atmosphere in and around Soldier Field to be electric as the Bears have a chance to clinch the NFC North. The Packers and Bears met at Lambeau Field in the season opener, and Green Bay was able to earn a 24-23 comeback victory in that game.

Chicago has been one of the biggest surprises in the NFL this season, and they come into this game with a 9-4 record. The Bears have gone 3-1 against NFC North teams this season and currently hold the number 3 seed in the NFC Playoff race. The Packers bring a 5-7-1 record into this matchup and have lost three of their last four games. Green Bay is all but eliminated from the playoff race. The Bears are a six-point favorite over the Packers on Sunday.

The Monsters of the Midway appear to be back in Chicago. The Bears put together an absolutely dominating performance in their week 14 win over the Los Angeles Rams, allowing just six points and intercepting four passes. Chicago has allowed just 19.0 points per game this season, and they have a roster full of Pro Bowl players. Linebacker Khalil Mack has recorded 10 sacks and 6 forced fumbles in his first season in Chicago. The Bears lead the NFL with a whopping 34 takeaways this season and will look to harass Aaron Rodgers all game long.

Quarterback Mitchell Trubisky was sloppy in his return from a shoulder injury in week 14, but he has played great this season. Trubisky has thrown for 2,579 yards and 21 touchdowns this season while completing over 64 percent of his passes. Running back Tarik Cohen has emerged as an elite playmaker this season, racking up over 1,000 all-purpose yards and scoring six touchdowns for the Bears. First-year head coach Matt Nagy continues to prove why he is one of the best play callers in the NFL, and he should be able to deliver some points in this game.

Packers quarterback Aaron Rodgers has absolutely dominated the Bears during his time in Green Bay. Rodgers has started in 20 games against Chicago and has posted a 16-4 record against the Bears. The Bears looked like they were going to beat Rodgers and the Packers in week one, but he led his team on an epic second-half comeback in the season opener. For the season, Rodgers has thrown for 3,700 yards and 23 touchdowns but is completing just 62 percent of his passes. Look for Rodgers to be at his best in this matchup with Chicago.

The Packers looked like a different team in their first game under interim coach Joe Philbin. Philbin took over after the Packers made the surprising decision to fire Mike McCarthy after a disappointing season in Green Bay. The Packers are averaging just 24.2 points on offense this season while giving up 23.6 points a game. Davante Adams has been a bright spot on offense this season, racking up over 1,100 receiving yards and catching 12 touchdown passes. The Packers defense will need to be ready to play in this game.

The Bears nearly beat Aaron Rodgers in the first game of the season, but they let him off the hook. Expect the Bears to come out hungry in this game, and they will play a complete game in this one. The Chicago defense is just too good at this point in the season, and they will dominate for a second straight game. Trubisky and the Bears offense will pick apart a bad Packers defense, and the Bears will roll. Bet the Chicago Bears -6.0 over the Green Bay Packers.