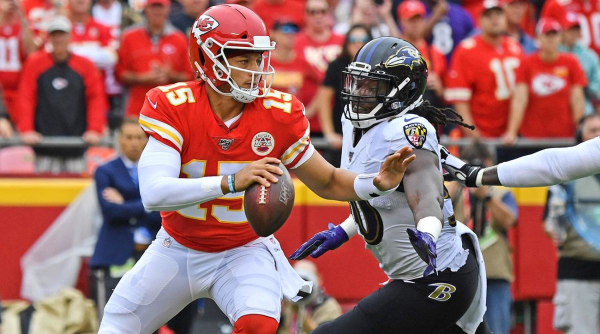 Week 4 of the NFL season provides some of the most options we have had this season for both cash games and GPPs. This slate has a lot of great DFS games and a few horrible ones, so we need to identify both situations in order to attack the upside in tournaments.

Patrick Mahomes is in Detroit this week, and this is another game where Mahomes projects as the best QB in fantasy. The Chiefs have yet to score under 26 points with Mahomes at QB, and this is not a spot where I expect this to come to an end. Matthew Stafford did pop up on the injury report, and if he is out, it would likely hurt Mahomes’ upside due to the blowout potential.

Daniel Jones is going to be really popular this week due to his performance last week, and I want nothing to do with the rookie this week. Jones had two rushing TDs on just four carries, and this production is unsustainable.

Since it was his first start, Tampa Bay was not really concerned with Jones’ mobility, and I think that this will change this week. Last week, Jones scored because the Bucs were in man-to-man coverage and the Giants just cleared out every receiver and gave Jones a wide-open running lane. This is very simple to stop once you are prepared for it, which I expect the Redskins to be.

The most interesting running back development of the week is that Justin Jackson is now out against the Dolphins and that Melvin Gordon may suit up earlier than expected. I expect to know the status of Gordon on Sunday morning, and if we get news that he will be heavily limited or out, I don’t see how you can get away from Austin Ekeler.

Ekeler has had a few fumbles that may be limiting his goal-line carries, but without anyone else to split snaps with, Ekeler is a fantastic play this weekend. Ekeler has been one of the best backs in the league in a timeshare with Jackson, and now a matchup with the Dolphins makes the spot even sweeter.

If you need to save money at running back, you are most likely looking at players like Kerryon Johnson and Wayne Gallman. Overall, I prefer Johnson because he has proven to be a productive NFL player more than Gallman, and we can be pretty confident that he will be getting almost all of the work in the Lions offense this week.

Keenan Allen will be the chalk this week against the Dolphins, and there is no reason why he shouldn’t be. If you think you are differentiated enough at different spots, feel free to roll Allen as your WR1.

If you want to go off the board at the higher end, I am going to continue to roll Sammy Watkins until he capitalizes on his elite opportunity in an elite offense. Watkins has continued to see a ton of targets in the best offense in football, and it’s only a matter of time before he has another huge game.

Terry McLaurin is my favorite salary saver on the slate because he has elite upside and an elite floor. Case Keenum is not helping McLaurin out this year on deep balls, and McLaurin has still been a top 20 WR in every week this season. At his price around the industry, McLaurin is a must-have in all formats.

It’s Will Dissly chalk week, and I think I will generally try to avoid this situation. Dissly now projects to see the lion’s share of snaps for Seattle, and the Cardinals have been horrible against tight ends, but I just don’t want to play a bad football player as chalk if I can avoid it.

An interesting pivot in GPPs off of Dissly is Jack Doyle. Without TY Hilton, I expect Doyle to see more targets and snaps in this game. Doyle is very similarly priced to Dissly on most sites, which is why he instantly becomes a great pivot on this chalky slate.