Cowboys Ownership Sets Third Meeting With Garrett; Who Will Be Coaching Dallas in 2020? 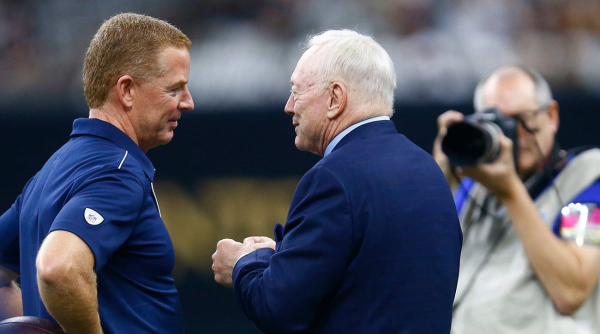 After watching Jason Garrett lead the Cowboys to another mediocre year with a roster full of outstanding talent, owner Jerry Jones had the world expecting that he was hours away from firing his head coach on Sunday.

Yet here we are, several days removed from Dallas’ final game of an 8-8 season with no announcement of a firing. Instead, Jones and the rest of the Cowboys ownership will meet with Garrett for a third time on Thursday to continue discussing Garrett’s potential future with the team.

At this point, it’s unclear what sort of resolution Jerry Jones and executive vice president Stephen Jones are looking for. Could they be considering keeping Garrett as head coach for another year?

Or could the Jones family be trying to convince Garrett to stay with Dallas in another capacity, such as an assistant head coach role?

The Cowboys are a family-run organization, and Garrett has been a part of that family for 13 years, so it’s not shocking this decision is weighing heavily on Jerry Jones. However, Jones made his frustrations with his head coach clear throughout the season, and most still expect the Cowboys to move on from Garrett.

So, let’s take a look at the potential candidates to be coaching Dallas next season.

Garrett’s best chance of keeping his job is his relationship with the Jones family. On Sunday, Jerry Jones said that working with Garrett has been “a source of pride for me. It’s an honor to have worked with him and to be working with him.”

Despite not yet being fired in Dallas, Garrett actually holds odds of +2000 to be the next head coach of the New York Giants.

Wherever Urban Meyer has gone, success has followed. After four winning seasons at Bowling Green and Utah, including a 12-0 season with the Utes in 2004, Meyer went on to coach the major college programs of Florida and Ohio State.

Meyer spent six seasons in charge of the Gators, three of which ended with a record of 13-1. In both 2006 and 2008, Meyer led Florida to BCS Championship victories. Meyer then spent seven seasons with the Buckeyes, where he won a College Football Championship in 2014.

If the Jones family moves on from Garrett, they’re expected to go hunting for a big name like Meyer. That’s why Meyer is currently the favorite to be Dallas’ next head coach with odds of +300.

Despite his youth and lack of experience in charge of a major program, Lincoln Riley has been associated with the Cowboys job for months.

Riley has been at the helm in Oklahoma for three years, all of which have resulted in 12-2 seasons and trips to the College Football Playoff. Including bowl losses, Riley is 36-6 overall with the Sooners.

With odds of +350, Riley is right behind Meyer to become the next coach in Big D.

Josh McDaniels is a highly coveted offensive mind in the NFL, which is why he’s been under consideration for head coaching jobs over the past two years. You may remember when McDaniels accepted a job with the Colts in 2017 before backing out to return to his position as offensive coordinator in New England.

McDaniels has plenty of experience as a high-level coach in the NFL, including two years in charge of the Broncos. After that brief spell, McDaniels ended up in New England, where he’s been the OC since 2012.

Since joining the Patriots, McDaniels has helped his team earn multiple Super Bowl victories, which is why he owns the third-best odds to be the next head coach in Dallas at +500.

If the Jones family moves on from Garrett Thursday, expect to hear Meyer, Riley, or McDaniels introduced as the next coach of the Cowboys in the coming days.