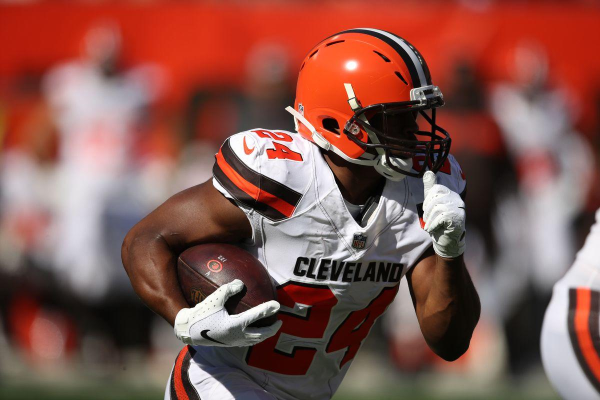 Saturday NFL football returns as the Cleveland Browns (5-7-1) travel to Sports Authority Field at Mile High to take on the Denver Broncos (6-7). For the Browns, they have been playing surprisingly well lately, going 3-1 overall since Hue Jackson was fired as head coach. Still, they have been good on the road for years (let’s be honest, they haven’t been good for years) so a road trip to Denver won’t be easy.

For the Broncos, they have played pretty inconsistently all season long. Nothing epitomizes that more than the fact they had won 3 games in a row prior to laying an egg against a dreadful San Francisco 49ers team last week, 20-14. With improved play out of the Browns, they could be in trouble if they have the same type of effort this week as they did last week. The two teams will square off Saturday with a 8:20 pm ET kickoff.

The point spread comes in with the Denver Broncos being 2.5-point favorites at home. The over/under on total points scored is set at 45.5 points.

On the defensive side, neither of these teams have been particularly good at slowing down opposing offenses. In terms of average total yards per game, the Broncos rank 24th, giving up 383.4 yards per game on average to opposing offenses. The Browns are even worse at 31st, giving up 411.2 yards per game. Despite the yards given up, the Broncos seem to be a bend not break team as they rank 9th in points given up to opponents (allowing 21.7 points per game). Cleveland comes in at 24th, allowing 25.5 points per game.

The Cleveland Browns have been the laughing stock of the NFL, but that might soon be changing. The Browns have been playing some inspired football since the coaching change and sit at third in the AFC North. In theory, they could still finish over .500, thanks to their one tie. The Browns are led under center by rookie Baker Mayfield. On the season, he has thrown for 2,877 yards, 19 touchdowns and 10 interceptions. He has also rushed for 109 yards on 29 carries.

Broncos Looking To Win At Home

Still clinging onto the chance of a postseason berth, the Denver Broncos will look to Case Keenum to lead them under center. On the season, he has thrown for 3,139 yards, 15 touchdowns and 10 interceptions. Unfortunately for Keenum, he has lost his two best receivers in Demaryius Thomas (traded to Houston) and Emmanuel Sanders (torn Achilles). As a result, he will be working with a wide receiving core that is led by Courtland Sutton, who has 572 yards and 3 touchdowns.

On the ground, the Broncos are led by Phillip Lindsay. This season he has 967 yards and 9 touchdowns on 168 carries. He also has 210 yards receiving and a touchdown on 29 catches.

Don’t Love Either Team, But Rolling With Browns

This one is a pretty tough one to choose. The Broncos have a better defense overall but the Browns offense has been shining brighter as of late. If the Browns offensive line struggles, Von Miller and Bradley Chubb might feast on Baker Mayfield, but I actually like the Browns in this one. They have been rolling as of late, have been playing more inspired football and are getting spotted a couple points in what I anticipate is a low-scoring affair. For my money, I am taking the Browns +2.5.

Tonight’s NBA betting schedule is lacking in overly compelling matchups, but tonight’s action will also be taking place with a few notable names missing. Booker, Morant, and Lillard Sidelined Tonight and Beyond Booker Out Versus Pistons Due to Hamstring Injury The Phoenix Suns lost Devin Booker (hamstring) on Tuesday against Golden State but closed out END_OF_DOCUMENT_TOKEN_TO_BE_REPLACED