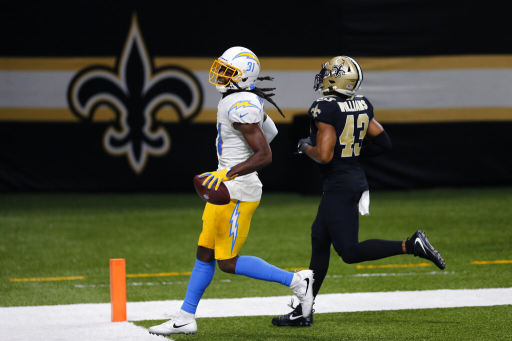 Sunday’s game between the Los Angeles Chargers and the Jacksonville Jaguars pits two teams that are stuck on one win.

In fact, both teams won their lone game in their respective season openers, so they have a combined nine-game losing streak heading into this one.

Kickoff is set for 4:25 p.m. at SoFi Stadium in Inglewood, Calif.

The Jaguars fell behind the Detroit Lions 17-3 at halftime and lost 34-16, never threatening to cover the closing line of +3.

The Chargers were on their bye last week. Their last game was a 30-27 overtime loss to the New Orleans Saints on Oct. 12.

DraftKings and FanDuel had drastically different opening lines for this one, but as of Thursday afternoon, both books listed the Chargers as 7.5-point favorites.

The line opened at 7 on FanDuel and moved all the way up to 9.5 before dropping back to 7 and then up again to 7.5. DraftKings opened at 9.5, and it quickly moved down.

None of the ATS trends favor either team, with both teams struggling for the most part to cover the spread in a variety of situations.

The under is also 9-2 in the Jaguars’ last 11 games after allowing more than 30 points in their previous game.

The Jaguars had two key players listed on the injury report and who did not participate in Wednesday’s practice. They are LB Myles Jack (ankle) and safety Jarrod Wilson (hamstring). Both suffered their injuries during last week’s game.

Chargers QB Tyrod Taylor returned to practice Wednesday following a month-long absence due to a punctured lung. Rookie Justin Herbert has impressed since Taylor’s injury and has been named the long-term starter.

Chargers WR Keenan Allen (back) was a limited participant in Wednesday’s practice. He has been Herbert’s top target, so it would be smart to monitor his status closer to the game.

It’s easy to be down on Jacksonville right now. The Jaguars shocked the NFL by winning their season-opener as 8-point underdogs against Indianapolis, but have since looked more like the bad team everyone expected them to be when the season began.

This week, they are also up against the fact that they have to travel to the west coast to take on a team coming off its bye week. It’s important not to become a prisoner of the moment, however. Look deeper at the Chargers, who are not used to being such heavy favorites.

Los Angeles covered the spread in three games in which they were at least 7-point underdogs. When they were 6.5-point favorites at Carolina, they lost the game by five points.

In a primetime game before the bye, they took New Orleans to overtime before losing. The public will remember that and be more likely to take the Chargers in this spot.

The Jaguars are not great, but the public perception will raise the profile of the Chargers. They’re not as good as the public believes them to be.