Cam and Jameis Square Off Thursday With A Lot To Prove 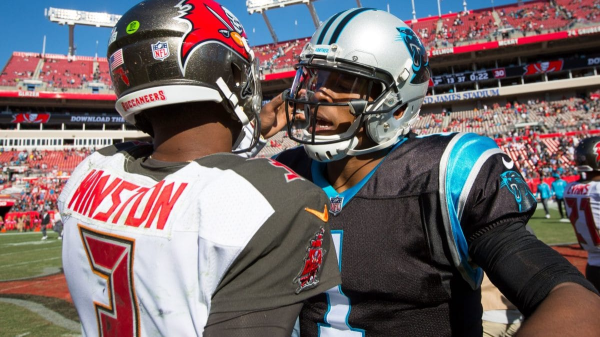 When Thursday Night Football kicks off this evening, we’ll get to see two quarterbacks fighting for very different goals.

For the Tampa Bay Buccaneers, Jameis Winston appears to be playing for his job this season. After being drafted first overall in 2015 and showing flashes of quality quarterback play, it’s time for Winston to become a proper franchise QB.

On the side of the Carolina Panthers, Cam Newton, another first overall pick, will be out to prove that his 2015 MVP award wasn’t a fluke. Newton should be in his prime at 30 years of age, and after a few disappointing seasons, he’ll be aiming to show the world that he can lead his team back to the Super Bowl.

So far, nothing has gone according to plan this year. Both teams enter the second week of the NFL regular season with a record of 0-1 after the Bucs took a 31-17 beating at the hands of the 49ers and the Panthers fell to the Rams by a score of 30-27.

In fact, an 0-2 record is something of a death sentence. Since 1990, only 12 percent of 0-2 teams have been able to recover, turn the season around, and reach playoff football.

If Newton doesn’t earn the Panthers a playoff berth, more questions will surround his status as a top-10 quarterback and whether or not he can ever bring a Super Bowl title to Carolina.

If Winston doesn’t earn the Bucs a playoff berth, it could cost him his starting job.

Let’s take a closer look at each quarterback.

The debate surrounding Newton includes the argument claiming Cam is a top-five quarterback with the ability to win another MVP in any given season, as well as the argument that Cam had one fluke year and is an average quarterback at heart.

Which is correct? While the truth normally lies somewhere in the middle, Newton’s 2019 season could give us a much better idea of which way to lean in the conversation of where he stands as an NFL quarterback.

So far, Newton has been much closer to average through just one week of the NFL season.

In Carolina’s Week 1 loss to the Rams, Newton was 25 of 38 for 239 yards and an interception. By completing 65.8 percent of his passes, Newton ranks tied for 23rd among all QBs. His 239 passing yards place him at 22nd in the league.

Obviously, those stats place Newton much closer to average than they do the top five of NFL passers, but a great game against Tampa Bay could push Newton much further up the list.

While very few question Newton’s status as a franchise quarterback, those questions certainly surround Winston. If this year goes poorly for Winston, the former first overall pick will surely be looking the term “bust” directly in the face.

Winston’s Week 1 performance didn’t give him much of a head start. Against San Francisco, Winston was 20 of 36 for 194 yards with a touchdown and three interceptions.

The Bucs turned the ball over on four occasions, three of which were Winston passes. Of those three picks, two were returned for touchdowns.

So, while Tampa Bay was able to outplay the 49ers with a 295-256 advantage in total offense, Winston handed his opponent 14 points in a game the Bucs lost by just 14.

Franchise quarterbacks don’t turn the ball over that frequently; former No. 1 draft picks who turn into busts do.

At +10000 odds, Winston has the same chance of winning MVP as Aaron Donald and J.J. Watt, so don’t expect the best numbers in the NFL from Winston. Instead, it’s time for Winston to prove he’s a reliable franchise quarterback who can protect the ball and put his team in a position to win games.