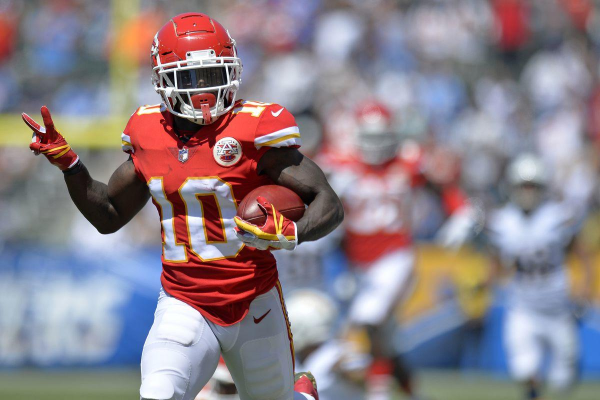 Thursday Night Football will include two of the AFC’s best as the Los Angeles Chargers (10-3) will travel to Arrowhead Stadium to take on the Kansas City Chiefs (11-2). Not only are these two of the best teams in the AFC, but they play in the same division (AFC West) and this game could have huge implications on a divisional winner. For the Chargers, they lost to the Chiefs in week one, 38-28, but since then have won 10 of their last 12 games, including 3 in a row. Last week, in a surprisingly close game, they came back to beat the Cincinnati Bengals 26-21. For the Chiefs, they have had one of the most prolific offenses in the NFL this season behind the arm of Patrick Mahomes. They have won two in a row, including a 27-24 overtime victory over a tough Baltimore Raven’s defense. The two will square off Thursday with a 8:20 pm ET scheduled kickoff.

The point spread comes in with the Kansas City Chiefs being 3.5-point favorites at home. The over/under on total points scored is set at 53.5 points.

These two teams have excelled all season long. For the Chiefs it has been on offense, for the Chargers it has been both sides of the ball.

Chargers Looking To Catch Chiefs In The Division

The Chargers have been one of the most under the radar teams of the season in the NFL. They don’t have the flashy offenses of a Chiefs or Rams team and they don’t have the high profile defense of a Chicago Bears, but they do everything really well. On the offensive side, they are led by Philip Rivers. The veteran quarterback has thrown for 3,638 yards with 29 touchdowns versus 6 interceptions and 23 sacks. His leading receiver this season has been Keenan Allen (88 receptions, 1,074 yards, 6 touchdowns).

Offensively, the biggest story to watch for the Chargers is the status of the run game. As of this writing, Melvin Gordon remains questionable and could be a game-time decision. Backup Austin Ekeler has already been ruled out which means that if Gordon can’t go, the snaps will go to Justin Jackson. On the season, Jackson has rushed for 139 yards and a touchdown on 27 carries.

It really is amazing the season that Patrick Mahomes has put together. He currently has thrown for 4,300 yards, 43 touchdowns versus 11 interceptions and 23 sacks. He has also rushed for 235 yards and 2 touchdowns on 53 carries. In fact, he needs just 13 more touchdowns over the next few games to break the record for touchdown passes in a single season.

His leading receivers are superstars as well. Travis Kelce has caught 86 passes for 1,159 yards and 10 touchdowns. Not to be outdone, wide receiver Tyreek Hill has gone for 1,258 yards and 11 touchdowns on 74 receptions. It is worth keeping an eye on Hill during this game, though, as he is less than 100% with both a heel and a wrist injury.

Chiefs In A Shootout

I have gone back and forth on this one a few times. While the Chargers defense is solid, the Chiefs showed that they could put up points even against a top-notch defense like the Ravens when necessary. The Chargers offense is also pretty solid, too, but the Chiefs have shown that they can run with even the best offenses (given that they went stride for stride with the Rams earlier this season, although they eventually lost 54-51). One thing that could make this game interesting is how the injuries play out. Will Melvin Gordon play? Will Tyreek Hill still be as explosive? These could have big ramifications on the game but still, at home, I just have a hard time betting against Mahomes and Andy Reid. I am definitely betting the over in this game, and will put my money on the Chiefs at -3.5.