Bears Sticking With Trubisky At Quarterback, But Are Their Playoff Hopes Over? 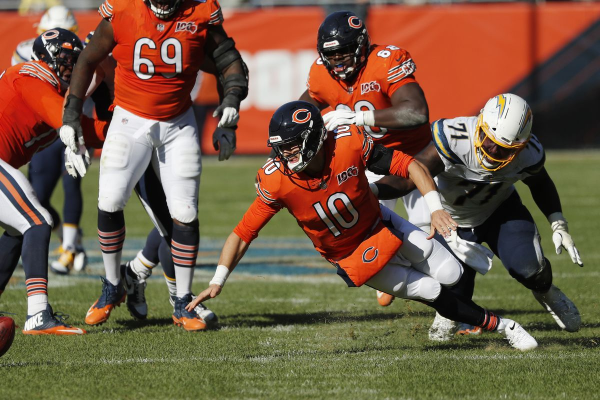 The 2019 season felt like it may very well belong to the Chicago Bears way back in August and September. Yet even a 3-1 start to the season has quickly been forgotten after three straight losses have put Chicago in last place in the NFC North.

Coming off a 12-4 season in which the Bears won the NFC North and earned a playoff berth, Chicago was supposed to have it all figured out. A solid defense that could rush the passer was supposed to back a capable offense with quarterback Mitchell Trubisky taking another step forward under head coach Matt Nagy.

It hasn’t gone according to plan.

Instead, reporters, analysts, and fans are all beginning to ask questions about whether or not it’s time to hand the offense over to backup QB Chase Daniel. That’s what happens after three straight losses to the Raiders, Saints, and Chargers.

More specifically, a quarterback controversy often arises when a struggling team loses its third contest in a row in large part because the starting quarterback commits two costly turnovers in the final quarter of play.

To be fair to Trubisky, the Bears still could have won their game against Los Angeles on Sunday on a last-second, 41-yard field goal after a crafty Trubisky scramble got them into position, but Eddie Pineiro’s kick missed the mark, and now Chicago is 3-4 through seven games.

On Monday, Nagy announced the Bears are sticking with Trubisky at quarterback, but should they?

At the helm of Nagy’s new offense in Chicago, Trubisky seemed to have it all figured out a season ago. In 2018, Trubisky was selected to the Pro Bowl after earning a record of 11-3 as a starter and leading the Bears to the playoffs.

By completing nearly 67 percent of his passes while tossing 24 touchdowns and 12 interceptions, Trubisky solidified himself as the Bears’ quarterback of the future.

Less than 12 months later, Chicago can’t be so sure.

Coming into Sunday’s game against Los Angeles, Trubisky ranked 29th in the league in touchdown passes, 34th in yards per pass attempt, 28th in yards per game, and 29th out of 31 in QBR. The 25-year-old wasn’t able to improve those numbers much in Sunday’s contest, as he completed 23 of 35 passes for 253 yards with no touchdowns and one interception.

Not counting Chicago’s win over Minnesota in which Trubisky was knocked out of the game very early on, the Bears are just 2-3 with Trubisky leading the charge this season.

For the most part, the defense has held up its end of the bargain. Aside from a 36-25 loss to New Orleans, the Bears haven’t allowed more than 24 points to any opponent this year. The defensive unit has actually held opposing offenses to 17 points or fewer in five of their seven matchups.

So, while Trubisky has had every opportunity to help his team compete for a division title, he and the offense look lost. After a 3-4 start, is Chicago’s season all but over?

Do the Bears Have A Chance At Playoffs?

A tough first half of the season hasn’t earned the Bears anything more than fourth place in the NFC North. And when you consider how strong the 7-1 Packers and 6-2 Vikings look, a division title looks like a pipe dream.

Taking a step back, Chicago sits 12th in the NFC playoff standings, which means they aren’t exactly close to a Wild Card spot, either.
But what do the odds say about the potential for the Bears to turn the season around and earn a playoff berth? After all, Chicago has winnable games against the Eagles, Lions (twice), Rams, and Giants up next on the schedule.

In short, it would take a near-miracle for Chicago to turn this season around and jump ahead of enough teams to make another playoff berth possible.