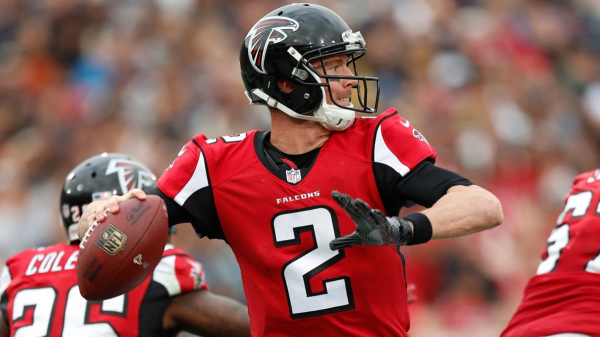 The Atlanta Falcons are just three years removed from playing in the Super Bowl, but things have not gone well for them since that epic collapse. Atlanta had a largely forgettable 2018 season that was full of injuries to several of their key players. The Falcons are in the NFC South, and the New Orleans Saints look like a huge favorite to win it again. Atlanta still features one of the most talented offenses in football, but staying healthy is a huge key for the Falcons this season.

The Atlanta Falcons made some minor transactions this offseason in terms of players, but they made some huge changes to the coaching staff. Offensive coordinator Steve Sarkisian is no longer with the team, and the Falcons have also made changes on defense and special teams. If Atlanta doesn’t have a better 2019 season, head coach Dan Quinn’s job could be in jeopardy as well.

Matt Ryan: Quarterback Matt Ryan threw for over 4,900 yards during the 2018 regular season and is still one of the best quarterbacks in the league. The Falcons love to throw the ball, so keeping Ryan healthy is priority No. 1.

Julio Jones: Jones remains the top target for Matt Ryan and is in camp even though he is hoping for a new contract. Jones had 113 receptions for 1,677 yards a season ago and is poised for another monster season in 2019.

Tevin Coleman: The Atlanta Falcons need to find more balance on offense, and Coleman is a big part of that equation. Coleman ran for 800 yards a season ago and also had 276 receiving yards. The Falcons will need an even bigger season from Coleman in 2019.

Rookie Class: The Atlanta Falcons selected a pair of offensive linemen with their first two picks in the 2019 NFL Draft. Guard Chris Lindstrom and tackle Kaleb McGary are both expected to see some time on the offensive line to help protect quarterback Matt Ryan.

Health will play a huge role in the 2019 Atlanta Falcons season, but this should be a huge bounce-back campaign. The Falcons still feature a ton of offensive talent, and their defense can make enough plays to keep them in games. Vegas has set the win total at 8.5 wins this season, and that feels a bit low. The Falcons are going to find a way to scratch out at least nine wins and get back in the playoff field in the NFC. Atlanta will be much improved, but they still won’t be good enough to win the NFC South or be a serious threat to win the NFC or Super Bowl. Take the over 8.5 wins, but stay away from the rest of the future bets.