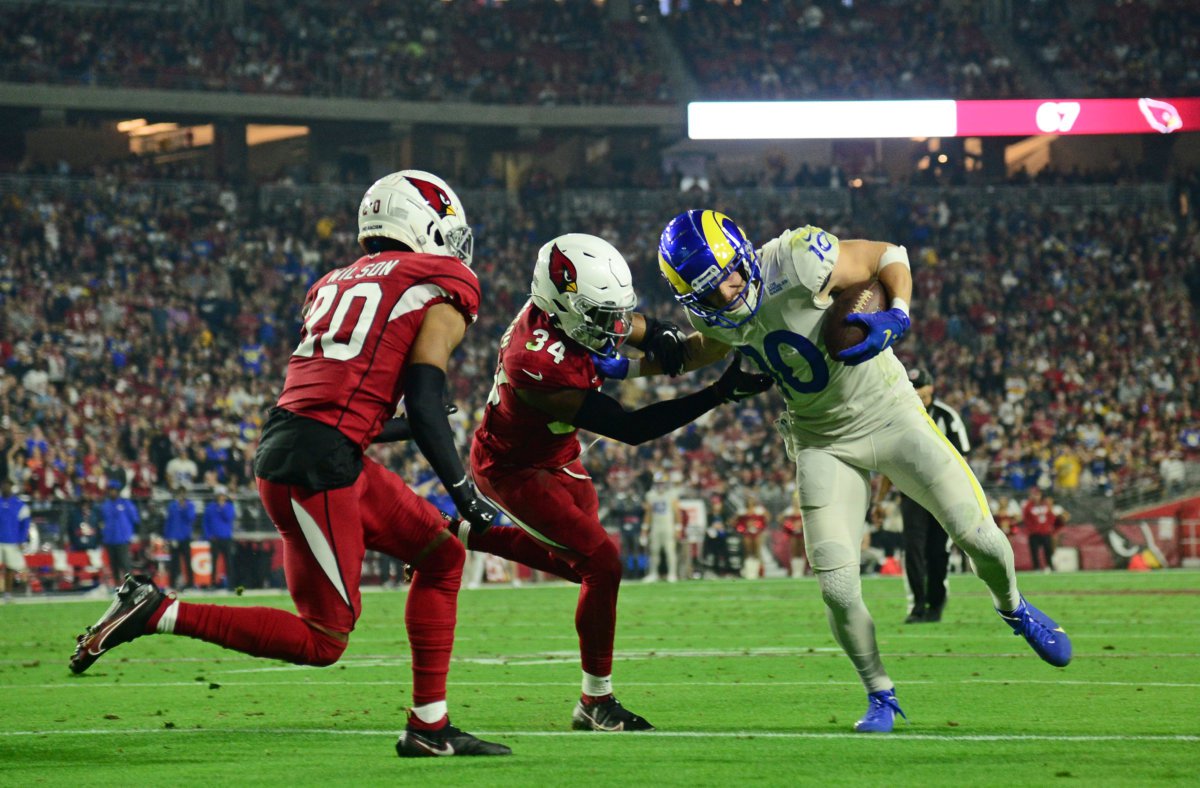 Favorites have dominated Super Wild Card Weekend, but will that remain the case as the opening weekend of the NFL playoffs wraps up with tonight’s Cardinals-Rams matchup?

Only one underdog has covered or won straight up thus far, as the San Francisco 49ers sent the favored Dallas Cowboys packing with yesterday’s 23-17 win at AT&T Stadium. As a result of that win, the NFC West will be the only division with two teams in the divisional round.

But will the NFC West champion Rams be the team to book a divisional round trip to Tampa? Or will the Cardinals, who are making their first postseason appearance since the 2015 season, claim their first playoff win in six years?

For six to not become seven, Arizona must win at SoFi Stadium for the second time this season. In Week 4, they ran around and over the Rams in a 37-20 win. In that win, the Cardinals racked up 465 yards and dominated the game after trailing after a quarter.

That win was part of a 7-0 start for Arizona, and at one point, the Cardinals were 10-2. At that time, they were on course for the top seed in the NFC.

But things came a bit unglued in the final several weeks, as they lost four of their final six games. That includes a 30-23 home loss to the Rams in Week 14, which proved to be decisive.

Arizona still could have won the NFC West on the final day of the regular season. But they failed to capitalize on the Rams’ overtime loss to the 49ers, despite a much more favorable assignment. Against the 6-10 Seattle Seahawks at home, they failed to hold a lead and fell 38-30.

Can the Rams Live Up to the Preseason Hype?

The journey has not been as straightforward as it could be for the Rams, but they enter the playoffs with the NFC West title checked off of their list.

That Week 4 loss to Arizona was their only loss in their first eight games, and things appeared to be setting up nicely for a run at the top seed in the NFC. But they dropped three in a row to the Titans, 49ers, and Packers to drop to 7-4. At that point, it looked like their NFC West hopes were toast with the Cardinals out in front of the pack.

But the Rams reeled off five straight wins after their loss in Green Bay, and thanks to some help from the Seahawks, secured the NFC West title despite their last-day loss to San Francisco.

The Matthew Stafford trade has worked out pretty swimmingly for the Rams, as they would have hoped. Stafford lost receiver Robert Woods, his #2 target, to an ACL tear nine games into the season. But Cooper Kupp, a leading NFL Offensive Player of the Year candidate, put together one of the best seasons in NFL history, helping Stafford produce one of the best seasons of his career.

The Rams received a timely boost with the recent return of running back Cam Akers. Akers tore his Achilles in July but made an extraordinary recovery and returned for the finale against the 49ers. He only recorded 13 yards in eight touches, but his return and availability are huge for the Rams’ Super Bowl 56 hopes.

Yes, that score prediction indicates confidence in both offenses to put up points. But defense will have as much of a role in how this game pans out.

For the Rams, it’s not about completely shutting down Kyler Murray and his playmaking ability. Even in the previous Cardinals-Rams matchup, Murray tallied 61 rushing yards.

But Murray was sacked four times and threw two interceptions, and though he racked up 444 total yards in the game, the Rams defense ensured it didn’t affect the final outcome.

The Rams finished the regular season tied for third in the NFL in interceptions (19) and third in sacks (50). They also were fifth in opponent passer rating (83.8). If they can harass Murray like they did in the previous matchup, they will be in a favorable position.

The outcome will also depend on whether or not Stafford will continue with his recent spell of generosity. While he put up big numbers this season, he also threw a league-leading 17 interceptions.

Seven of those picks were in the final three regular season games, and he threw multiple picks in all three games. The Cardinals were fourth in the NFL in turnover margin (+12) and tied for the league lead in fumble recoveries (14). The last thing Stafford needs to do in this game is give Murray extra possessions to work with.