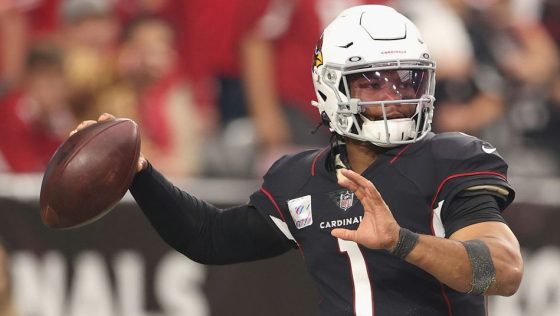 The Cardinals are the NFL’s last undefeated team, and it is no fluke. Only one of their games has been decided by less than a touchdown. It’s no surprise then that their NFL betting odds now look far different across the board than they did entering the season.

Cleveland might not have a bad loss, as they lost to the Chiefs and Chargers on the road in close games. But I think it is fair to say they are not living up to preseason expectations.

But the Browns are small favorites at home so the markets have not given up on them just yet. We’ll see if they justify that.

Arizona Cardinals vs Cleveland Browns odds are via FanDuel Sportsbook as of Sunday, October 17, 2021 at 7:10 a.m. ET. Want to see NFL betting odds from several top online sportsbooks for every NFL matchup each week? Check out our NFL odds.

Arizona had been scoring at will prior to last week’s 17-10 win over the 49ers, but they pulled out the win to remain undefeated.

Kyler Murray had his most modest game of the season, but he remains one of the top MVP favorites along with Josh Allen, Justin Herbert, and Dak Prescott. Arizona has one of the most balanced offenses in the NFL, ranking seventh in passing and eighth in rushing. That is a little surprising as Murray has made a point of not running as much this season. But when it comes to his passing, the Cardinals have four players with more than 20 catches on the season, which is part of what makes them so hard to defend.

Their offensive exploits are impressive, but the Cardinals look more and more like a true looks a true contender because they are playing defense too. They have allowed only one opponent to score more than 20 points, which is notable given some of the offenses they have faced so far. Takeaways have been big for the Cardinals, as they have ten of them in five games.

The only reason to worry about this group is that they are not strong against the run, ranking 29th in that area. That is the strength of Cleveland’s offense, and it will be interesting to see if they can have some success stopping it without overcommitting.

Cleveland knows what it does well. With running backs Nick Chubb and Kareem Hunt, they are the top rushing team in NFL. Chubb is out for this game, so Hunt should log his most carries of the season. He is averaging well over five yards per carry, so the Cardinals aren’t getting a reprieve with Chubb sidelined.

Unfortunately, when the Browns need to make a play through the air, Baker Mayfield has struggled to make it happen. Jarvis Landry has been hurt most of the season, and Odell Beckham Jr. isn’t making much of an impact. Is he getting an opportunity to? That has been the topic of media debates. It is nice to see TE David Njoku emerging, but the Browns need more than him and Kareem Hunt in the passing game, especially if they are playing catchup.

One of the reasons for the heavy preseason hype for the Browns was expected improvement on defense. Last week they gave up 26 fourth-quarter points to the Chargers. I know it is just one game, and it was a road game against a good team. But that is just not something that really good teams do.

I was surprised at this line, to say the least. Last week the Cardinals showed they can win a low-scoring game, and they are a great value to snag a late win in this one. I would definitely trust Murray more than Mayfield in a tight game. They are a great teaser too, forcing the Browns to have to win by a touchdown.

The Browns can put pressure on quarterbacks, but Kyler Murray is tough to get on the ground. With his speed I think he can get away from the rush and pick up some yards. Once he gets going, he can pick this up on just one play. He is one of a few quarterbacks who has that kind of skill, even though he is focusing more on beating teams with his arm this season.

The 2022 Formula 1 season is only six races deep, but the race for this season’s championship alerady appears to be down to just two drivers. Last season, Red Bull driver Max Verstappen claimed his first Formula 1 World Drivers’ Championship in highly controversial circumstances, with Lewis Hamilton denied what would have been a record-breaking END_OF_DOCUMENT_TOKEN_TO_BE_REPLACED