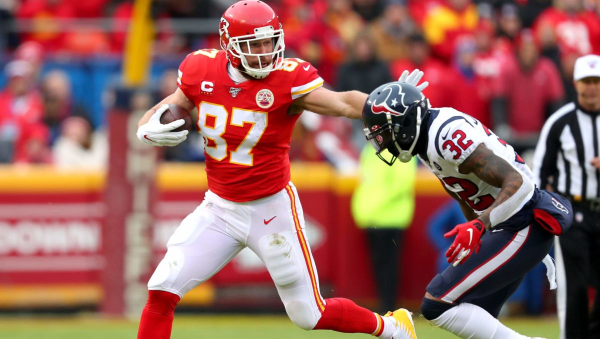 The road to the Super Bowl continues on Sunday in the AFC Championship Game as the Tennessee Titans will be at Arrowhead Stadium to take on the Kansas City Chiefs. This one is a true test of run versus pass as Derrick Henry and the Titans will try to show their physical dominance, while Patrick Mahomes and the Chiefs will take to the air to do their damage.

With a trip to the Super Bowl on the line, these two will match up Sunday with kickoff scheduled for 3:05 pm ET.

It is truly up for debate whether Henry or the Titans’ defense was more impressive in their upset victory over the Baltimore Ravens. On the one hand, Henry ran for a staggering 195 yards on 30 carries (6.5 yards per carry) against one of the best defenses in the league.

On the other hand, the Titans’ defense held the NFL’s best scoring offense to just 12 points while forcing two interceptions off of likely MVP Lamar Jackson. Regardless, if the Titans play with the same mentality as the last two weeks, Kansas City could have its hands full.

That is not to say life will be easy for Tennessee, though. After falling behind 21-0 after one quarter, the Chiefs put up 51 points in just three quarters against Houston last week. Mahomes threw for 321 yards and five touchdowns while also leading the rushing attack with 53 yards on seven carries.

While the Chiefs’ defense may be more apt to give up points (they allowed Houston 31 points), they can also put them on the scoreboard in a hurry with the best of them.

The Chiefs come into this one as seven-point favorites playing at home. The over/under on total points scored is set at 53.

Looking For Yet Another Upset

After having knocked out two of the best teams in the AFC in the New England Patriots and Baltimore Ravens already, the Titans are looking for the trifecta if they can also knock out Kansas City. To do so, they will look to quarterback Ryan Tannehill to once again lead them. On the season, Tannehill had 2,742 yards, 22 touchdowns and six interceptions.

Tannehill’s leading receiver this season has been A.J. Brown with 52 catches for 1,051 yards and eight touchdowns.

Still, while the passing game can help manage a game, it has been the ground attack that has been winning for the Titans. Henry has been an absolute beast in the playoffs, and on the year, he rushed 303 times for 1,540 yards and 16 touchdowns.

He also offers a little in the passing game as he has had 18 catches for 206 yards and another two scores. If the Titans are going to win again, Henry has to have another big game.

End Of The Cinderella Story?

Kansas City would love nothing more than to go to the Super Bowl in a couple of weeks, and you can expect Andy Reid to be ready for what the Titans will throw at him. While his defense may not be elite, he is hoping they can slow down Henry enough and let his own offense take over.

Leading his offense will be Mahomes, who has thrown for 4,031 yards, 26 touchdowns and five interceptions.

The Chiefs’ go-to target is absolutely tight end Travis Kelce, who had 97 receptions for 1,229 yards and five touchdowns this season. Last week, against Houston, he went for 134 yards and three touchdowns on 10 receptions. Add Tyreek Hill and Sammy Watkins to the mix, and it is a nightmare scenario for opposing defenses.

Even at running back, the Chiefs have been getting some solid production out of Damien Williams. In last week’s win, he rushed 12 times for 47 yards and two touchdowns. He also added another touchdown and 21 yards on two catches.

Taking Kansas City And The Points

There is no denying that Henry and the Titans have been on a roll as of late, but so have the Chiefs. Granted, the Ravens also had an elite offense, but the Chiefs’ is built a little differently.

As good as Jackson is, Mahomes is a better pure passer and may have more weapons around him. With that in mind, the Chiefs can put points up in bunches (see the second quarter last week when they put up 28).

If that happens, the Titans will have to resort to throwing it a little more than they would like, and I don’t think Tannehill has the ability to keep up with Mahomes. The first quarter will determine a lot in this one, but for my money, I like the Chiefs despite laying seven points.