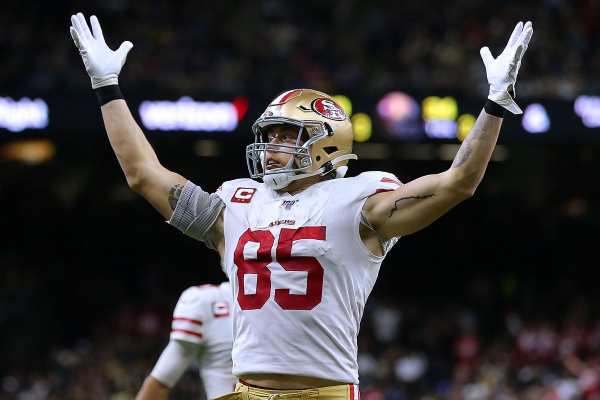 After a potential Super Bowl preview against the Baltimore Ravens, the San Francisco 49ers went on the road once again for a possible preview of the NFC Championship Game against the New Orleans Saints on Sunday. The volume in the Superdome grew with every Drew Brees touchdown pass, but Jimmy Garoppolo and the San Francisco offense proved they could win in a shootout, topping the Saints, 48-46.

It was a game fit for Sean Payton and Brees as the Saints and Niners traded touchdowns over and over. Each team punted just once in the first half, as San Francisco quickly recovered from a 21-7 deficit to take a one-point lead into the half.

The second half included better defensive efforts, but the scoring continued. With just under two and a half minutes remaining and trailing 45-40, Brees, who threw for 349 yards and no picks, threw one of his five touchdown passes with less than a minute on the clock.

New Orleans would fail to convert a two-point conversion but took a 46-45 lead.

This was one of those big games in which Garoppolo had a chance to prove himself as a game-winning quarterback, and he did just that with some help from the best tight end in football.

After a pair of incompletions, San Francisco faced a 4th-and-2 from its own 33-yard line. Garoppolo took a shotgun snap and threw a quick pass to Kittle in the left flat. From there, the Niners star broke the initial tackle and sprinted down the left sideline.

Kittle then took contact and continued rumbling down the field for another 15 yards while his face mask was being pulled the entire way. In the end, Kittle’s heroics netted 53 yards and set the Niners up for the victory.

The gain plus a personal foul put San Francisco at the New Orleans 14-yard line, and Robbie Gould was then able to kick a game-winning field goal from 30 yards out as the clock expired.

In a wild shootout, Garoppolo matched Brees with 349 yards passing while throwing four touchdowns and one interception. Kittle caught six passes for 67 yards and a touchdown.

The Battle For NFC Supremacy

This San Francisco-New Orleans matchup was a contest between two of three 10-2 teams in the NFC. And while we wouldn’t know about the Seahawks losing to the Rams and falling to 10-3 until Sunday evening, this contest also ended up being for control of the conference’s top seed.

With the win, the 49ers improved to 11-2 and now stand unmatched in the NFC West and the rest of the conference. San Francisco can also boast recent wins over the Packers and Saints, with only a narrow defeat to Baltimore in between.

That means San Francisco has beaten two of the NFC’s three 10-3 squads, with a chance to take down the third in the final week of the season when the Niners go into Seattle.

However, despite the fact that home-field advantage and a bye week in the playoffs are now in their sights, the job isn’t done yet for the 49ers.

Unless the Seahawks lose against either the Panthers or Cardinals, the NFC West is likely to be decided by that Week 17 matchup between Seattle and San Francisco.

And with three 10-3 teams on their heels, the 49ers will likely need to stay perfect to keep hold of that top spot.

While the AFC is starting to look like the Ravens and then everyone else, the NFC is the exact opposite. Sure, the 49ers may have proven themselves as the top team with wins over Green Bay and New Orleans, but there are several dangerous squads ready to make deep playoff runs.

In addition to San Francisco and the division-leading Packers and Saints, the 9-4 Vikings and 10-3 Seahawks are not to be overlooked. And with a big win over Seattle, the 8-5 Rams are now in the picture.

The only weak spot in the conference is the NFC East, which is currently led by the 6-7 Cowboys.

So, who’s the favorite in the NFC?

It comes as no surprise that the 11-2 49ers now lead the way with odds of +175 to win the conference. They’re followed by the +230 Saints and then a significant gap before getting to the Packers and Seahawks at +600.