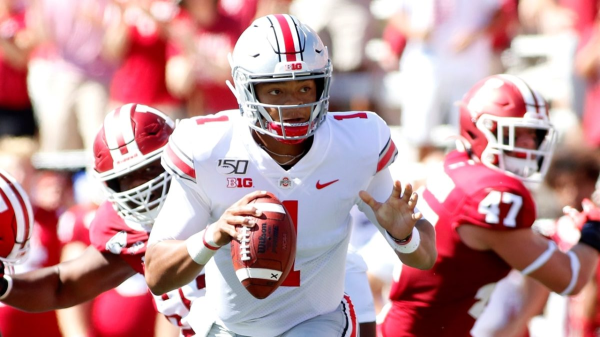 As the march towards the College Football Playoff continues, the grueling schedules of several Top-25 programs are set to spoil the hopes of fanbases around the country. Featuring three ranked matchups, Week 6 of the NCAA Football season is poised to show us who the biggest threats to No. 1 Alabama and No. 2 Clemson are.

Some of the best weekends of the year are when we have a slate of college football games like the one coming up. While the top two teams in the nation will be off this week, seven out of the top 18 teams with the best odds to win it all will be up against tough competition on Saturday.

Representatives from the SEC, Big Ten, Big 12, and Pac-12 will be under the microscope as some of the most important contests of the season get underway.

Let’s make our way down the list of odds and highlight the weekend’s biggest games.

College football feels like Alabama and Clemson, then everyone else, doesn’t it? We may be heading towards a fourth championship matchup between the sport’s two best teams in the last five years, and this week won’t do anything to stop it.

Both No. 1 Alabama and No. 2 Clemson will be watching football from the couch this weekend while enjoying a weekend off.

After narrowly escaping North Carolina with a 21-20 win, Clemson dropped to No. 2 in the AP Poll but remains the frontrunner to win the National Championship at +185 odds. The Tigers’ odds are down slightly from +170 a week ago.

Alabama was able to claim another dominant victory last week, which propelled it to No. 1 in the AP Poll after Clemson’s scare. With 11/4 odds, the Crimson Tide have the second-best odds to win the College Football Playoff.

The 5-0 Ohio State Buckeyes have looked absolutely dominant through the first five weeks of the season, allowing more than 10 points just once. However, Week 6 will bring on the Buckeyes’ toughest opponent yet in No. 25 Michigan State (4-1).

Ohio State comes into this contest tied for the third-best odds to win it all, alongside No. 3 Georgia at 8/1. Michigan State is currently sitting on 150/1 odds but presents a notable threat to the Buckeyes within the Big Ten.

By the way, Georgia plays a weak Tennessee team this weekend.

The best matchup of the weekend figures to be No. 7 Auburn (5-0) against No. 10 Florida (5-0). While the winner can instantly call themselves a championship threat, the loser will likely become an afterthought in the playoff discussion.

With a big win against No. 13 Oregon already under its belt, Auburn currently owns the eighth-best odds to win the College Football Playoff at 50/1.

Meanwhile, Florida is part of a group of six teams with 100/1 odds, which is good enough for 12th-best in the nation.

For 4-0 Iowa and 3-1 Michigan, Saturday’s contest feels like a playoff game in its own right. The winner will still have a shot at conference glory and more; the loser will be out of the College Football Playoff hunt.

While Iowa currently holds 150/1 odds to win it all, Michigan is sitting at 60/1 odds, even after a devastating defeat to No. 8 Wisconsin. Including Saturday’s game, the Wolverines still have five ranked opponents on the schedule.

The Best of the Rest

Although we’ve touched on the biggest games of the weekend, several other top teams are facing stiff competition on Saturday.

No. 13 Oregon (3-1) also faces a tough task as it hosts the 4-1 California Golden Bears. The Ducks join both Florida and Texas as teams with 100/1 odds at this point in the season.

And don’t overlook a contest between 3-1 Utah State and No. 5 LSU (4-0). Fans of the Tigers will be happy to know this game will be taking place at LSU. At the moment, LSU trails only Clemson, Alabama, Ohio State, and Georgia with odds of 14/1.

Get ready for a weekend of college football that is sure to reveal some of the true championship contenders in the sport.