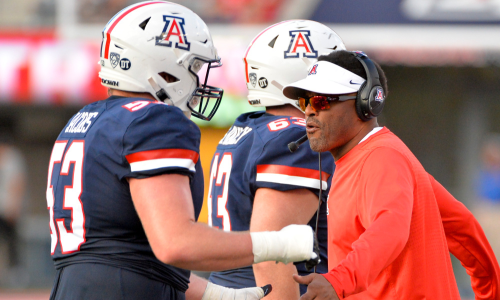 In their first game of the season, Arizona is facing off against their conference foe #20 USC. The two Pac-12 teams are set to face off on Saturday 11/14 at 2:30 pm in sunny Tucson, AZ.

In last weeks outing the high-flying USC offense ran a CFB high 95 plays. Not only is this the most college football has seen so far this season but it also 24 more plays than they averaged per game last season (71.8). Against the Arizona State Sun Devils, the Trojans were able to pull off a remarkable comeback late in the game. With 3:04 left in the 4th quarter, USC was down 27-14 and eventually stunned the Sun Devils with two quick touchdowns and an onside kick.

Having not played any game yet this season, as their game against Utah was cancelled due to Covid-19, the Wildcats are looking to make a statement win in their home opener. Last season, the team did not stand up to expectations. Finishing 4-8 with a 2-7 record last year, the Wildcats are looking for Sophomore QB Grant Gunnell to lead the charge. Gunnell was able to complete 65.2% of his passes in eight games last season which gives him the best rate of any freshman in Wildcat history. It also ranks as the fourth best single-season completion percentage in Arizona’s history.

The two teams have only played each other 43 times since their first game in 1916. USC has a much more favorable record in the series as they lead 35-8. The Trojans are currently riding a 7-game winning streak against the Wildcats dating back to 2013. Under head coach Clay Felton, USC is 5-0 against the Arizona and has outscored them 190-113. Although USC has been able to handle Arizona in recent history the team has not done exceptionally well against the spread having gone 10-15-1 ATS since 2018. For their first game of the season, USC was an 11.5 point favorite and was able to come out on top by only one point in their nail biting W last week.

Arizona doesn’t have the most favorable record against the spread either as they went 3-8-1 ATS last season.

Advice for the spread: In all honesty, I would avoid the spread in this game. The 14 points as a very large margin for both of these teams. However, if you are going to bet the spread, take USC -14.

The high octane offense that USC has will be a lot for the Wildcat defense to handle. I mentioned above that the team pulled off 95 plays on offense but how did they perform from all those plays? Let me tell you they performed very well. QB Kevon Slodis broke the previous USC single-game completion record with 40 passes and did so by throwing for 381 yards and 2 TD’s. Slodis connected with favorite WR’s Drake London and Amon-Ra St. Brown for a combined 225 yards. On the ground, RB’s Vavae Malepeai, Markese Stepp, and Stephen Carr all saw the field combining for 158 yards and 2 TD’s. Arizona’s defense allowed 35.8 PPG last year which ranked them 118th out of 130 teams. The Wildcat defense will have all they can handle on Saturday and will have a tough time controlling the USC offense.

In their past 5 games played between the two in Tucson, the average game score has been 56 PPG. Making the 67.5 point prediction quite a bit higher than their past few games. With Arizona averaging 26.9 PPG last season and USC averaging 32.5 PPG last season the under is most likely the hit.

However, the number could potentially get shattered. With a high flying offense and a less-than average defense, USC could run up the score. If both defenses play average and the QB’s from each team shine, the score of this game could reach over 75.

Advice for O/U: The averages from history show that these two teams do not get ver 60 points per game. I do not think this game will be much different. Take Under -110.